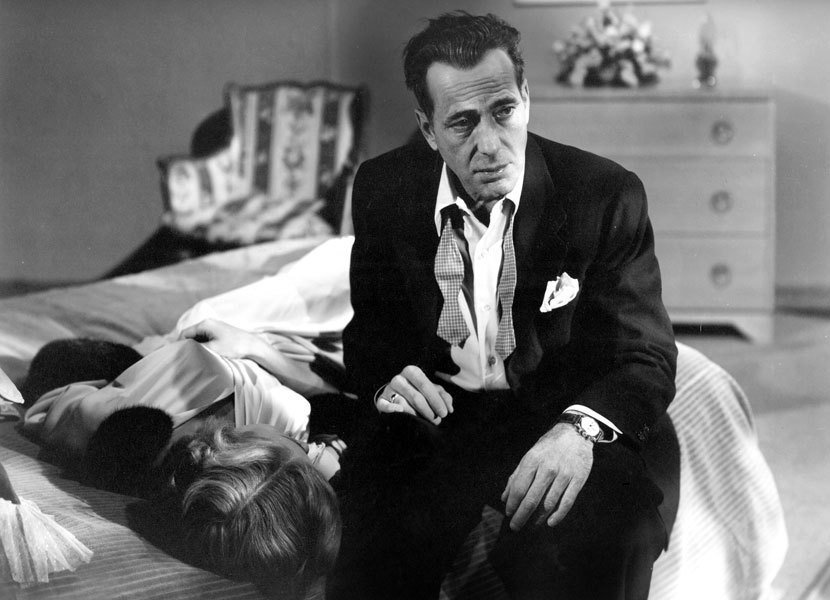 I watched this film for the first time last week, then for a second time on the same day. I like Humphrey Bogart, so that was the main reason for choosing it from those on offer from that decade. That and my curiosity to know if Joy Division had based their song of the same name on the film.

They had nicked the title from the film, allegedly, but nothing in the lyrics suggest any other direct connection. But the film's downbeat ending reflects a pessimism about life common to both.

Did Dixon Steele (Bogart) murder the young hat check girl, Mildred Atkinson (Martha Stewart) or not? It’s the police investigation into the crime that gives the plot forward motion. But it’s the relationship Steele forms with his neighbour, Laurel Gray (Gloria Grahame), who gives him an alibi and then falls in love with him, that propels the drama.

Presumably, if a flawed hero is one brought low by his character failings, a flawed villain is one who is temporarily raised up by his few plus points. Dixon Steele is a flawed villain. Because we’re watching Bogart, and because he’s given some of the same wisecracking lines that might have been uttered by Sam Spade or Rick Blaine, we (and Gray) give him the benefit of the doubt when we see him lose his temper twice in the first ten minutes. But when he shows no empathy as the police show him photos of the dead girl’s body, we begin to wonder not whether he is guilty of murder, but just of being a not very nice human being. (He actually asks the officer leading the investigation if he's simply guilty of not caring.) A more sympathetic interpretation is that he has been damaged by his war experiences, and not just to the extent that he’s not written a successful screenplay since before the war.

Things get worse. In a road rage incident, Steele reaches for a rock to bash out the brains of the driver whose car Steele has dented. Only Gray’s intervention stops him. Surely, both audience and Gray have to conclude that she must leave him, regardless? Yet while she makes plans to escape to New York, she seeks counsel from Sylvia, the wife of the police sergeant (‘Brub’ Nicolai), a former army buddy of Steele’s, who is investigating him.

Brub and Sylvia, along with Steele’s agent, Mel, are supporting characters who help create an absorbing film, giving an added dimension to what might otherwise be an ordinary police drama. 1001 Movies would have you believe it’s also ‘insightful about Hollywood’, but it didn’t strike me that way. This was not as obviously about Tinseltown as, say, Sunset Boulevard. But it is worth watching for the noir cinematography, for the sharp script, for Gloria Grahame, and for the character of Dixon Steele. In losing the love he so desperately wanted to keep, he winds up in the same lonely place where he first started, with only scant memories for consolation:

"I was born when she kissed me; died when she left me; I lived a few weeks while she loved me."