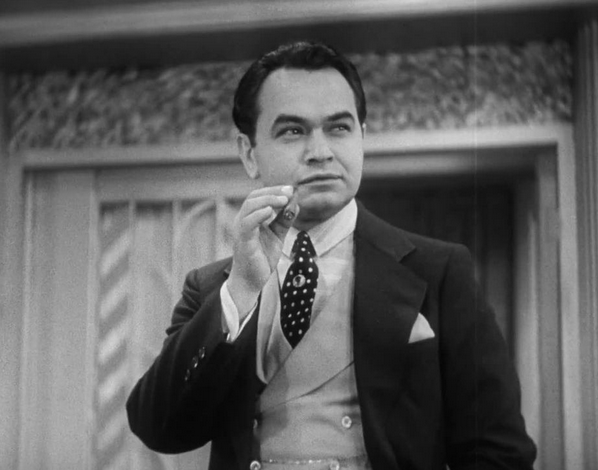 Edward G Robinson dominates an improbable story of a cheap crook rising to rich notoriety with scarcely a sign of criminal activity beyond a single murder. Having a giant ego isn't actually illegal, nor is wanting to "Be Somebody!", Little Caesar's sole motivation.

Rico earns his nickname after being introduced to the members of the boss who first takes him on. Sam Vettori, a tall guy, aims to put Rico, a short guy, in his place after Caesar puffs up and announces his full moniker - Caesar Enrico Bandello. Vettori looks down and calls him "Little Caesar!" Rico accepts this at the time, but it's not long before he's the tall guy and Sam is put in his place.

Strangely, we see none of the racket activities that Rico indulges in; all the violence is bloodless and most of it is off-screen (even Rico's death is obscured by an advertising hoarding). The performances of some of the other characters might be similarly described. If Douglas Fairbanks Jr can act, it didn't show up in this picture, where he plays Rico's best mate, Joe, from their petty larceny days. He assists Rico in robbing a gas station (shots are heard, but we don't know if the owner is wounded or murdered) but later tells Rico he wants to go straight, to go back to dancing and womanising. Rico persuades him not to just yet, and he uses Joe as a reluctant lookout at a raid where the former murders the Police Commissioner. Joe definitely wants out now and disappears from the action while we see Rico's rise and rise. This is one of the oddities of the plot: characters are just conveniently absent while we follow Rico's activities, even though they should be there with him (or against him). This is no different than so many films that set aside characters when it is more important to pare down the action and simplify the story for the audience. Plotting aside, the film is slickly made. Standards of editing and photography, the fluidity of camerawork and the quality of the sets have moved on in Hollywood: so-called 'production values' are high (assuming the odd cheap unpainted ceiling is a deliberate ploy to add a darker tone to the criminals' hideouts). The use of sound and dialogue is now much more naturalistic. The era of talkies had by now properly arrived.

Rico's nasal, strident voice and vocal tics ("See, see?" and "Nyeeer!") have been much imitated, as has his habit of pointing with his thumb (see Tony Blair, who had been on the course where they are told not to point with their index finger, had a big ego too.) but Robinson is a wholly engaging gangster, partly because we see little gangstering: director LeRoy and his writers (including an uncredited Darryl F Zanuck) clearly wanted to make him a sympathetic character, while his nemesis, Det. Flaherty, is distinctly unsympathetic.

Perhaps the most striking thing about the movie is how well dressed it is and, most notably, how obsessed with dress Rico is. Joe may dance at The Bronze Peacock, but it's Little Caesar who struts like a peacock, especially in the scene where he dresses up to meet Big Boy (yes, really, the big noise in town is called Big Boy) and he and his henchman Otero almost get orgasmic together about a monkey suit. The emphasis on dress is all the more striking when Rico is on the run and we see him in a mess at a flop house. The change is dramatic.

The author of the book on which the film is based, William Burnett, apparently complained when he found out that audiences were picking up that Rico may be gay - unlike the heterosexual character in his novel. Watching this in 2021 the signals are obvious. I wonder how much would have been picked up by contemporary audiences in 1930. However, whilst some might argue that this explains Rico's 'psychology' and motivation, the film is not about his sexuality. It embraces and epitomises the genre of gangster movies that were already emerging and which were to become Warner's specialism. Without Robinson's Rico, James Cagney's huge success as a gangster might not have happened, nor Bogart's: Little Caesar made crime respectable, at least for the purposes of the Hollywood box office, and almost every subsequent hoodlum owes him a debt of gratitude...see?