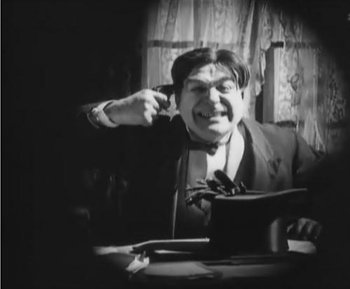 There is something compelling about this movie, perhaps because it takes place almost exclusively in a single location, but opened out by the fantasising of Mme Beudet. From the beginning, she is established as a fantasist, playing Debussy at the piano, but utterly bored, listlessly leafing through a magazine and bringing to fantastic life, some of the figures therein. She pictures a handsome tennis player carrying off her mercantile (=dull, bourgeois) husband who harangues her for not wanting to accept tickets to a society event, a presentation of Faust (not sure whose Faust, but someone is going to be damned if they're not careful). He executes a running joke - pretending to shoot himself with the empty revolver in his desk drawer. They have a running battle about the positioning of a vase of flowers on a table: he insists on the centre; she moves it off-centre.

The atmospheric lighting and claustrophobic interior, the relentless mocking of the husband and the unsympathetic shop manager and his social-climbing wife (invited to the society event instead) build a picture of the Mme's loneliness and misery. This is compounded by Beudet's locking of the piano so Mme cannot enjoy herself at home, or escape her dreary existence. She reads Baudelaire's Death of the Lovers, (her love for him has died for sure), but hurls it away in impatience, reminding her of the Debussy she cannot play. Even her servant goes out with her fiance.

Left alone, she is tormented by visions of her husband and she begins to form the idea of using his revolver against him. Each character is seen to express both frustration at the other's ways, but also remorse at their anger. In the kind of tense "we know more than the characters" scene later to become familiar in Hitchcock thrillers, we watch as Beudet toys with the now-loaded gun, threatening his suicide yet again: will he shoot himself? Instead, in exasperation at his wife, he fires it at her! Fortunately, he hits a vase instead. In his horror, he thinks she has loaded the gun in a ruse to have herself killed. He can't conceive that she would want him dead. His consolation of her turns quickly to self pity as he envisages life without his beloved. Behind the pair, an image of a theatre curtain coming down on their melodrama appears in the mirror.