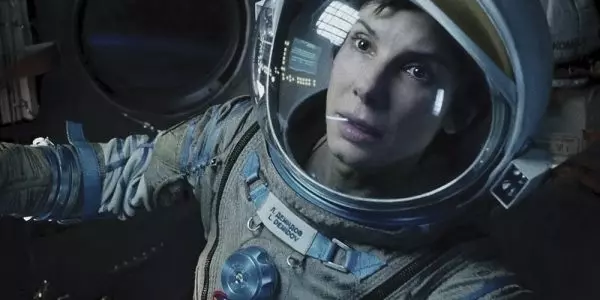 A simple story, well told is one of the best pleasures of cinema. Films that have complex plots, or layers of political intrigue, overstuffed dialogue (think of anything written by Aaron Sorkin!) or deal so explicitly with the seamier side of life as to be almost unwatchable all have their place. Cinema is not only about 'moving pictures'. But having sat through so many meaningful films that forget about vision and movement, it's really rather wonderful to find a film that is about nothing else.

It starts, curiously, with barely any movement or sound at all, the camera filled with a gently but constantly shifting view of Earth. Gradually, a space shuttle becomes visible, and as it does, we start to hear the conversation between the garrulous Matt Kowalski (George Clooney) and mission control (Ed Harris - who else would you want in charge?)  Probably the first thing you hear Kowalski saying is "I have a bad feeling about this mission" which is his standard cue for a tale to entertain (or bore) his fellow astronauts and the folks down on Earth. Little does he know. (Later, he tells Stone, "You've got to learn to let go" as she is desperately clinging on to the outside of the broken spaceship that is her life-raft...and Kowalski himself, who is about to set himself adrift.)

Cuaron's editing is minimal as the camera floats us weightless through space. We drift in and out of proximity to the astronauts, are propelled through ship interiors, whizzed down giant golden solar panels, eased gently inside Stone's helmet to view her heads-up display telling us she has barely any oxygen left while her agonised breathing fills our ears.

It occurs to me that one of the odd things about this film is that none of the conversations between characters are face-to-face, in camera. All are mediated through radio. Unless, of course, you count the conversations Ryan Stone (Sandra Bullock) has with herself.

That's not to say that characters don't talk to each other at all. They do. But since almost all the dialogue is passed through an electrical device, it has the effect of reducing relationships to the same synthetic quality as the processed food astronauts consume. When Kowalski asks Stone if she has anyone on Earth looking out for her, the best he can do to intensify his attention (and ours) on her reply is to switch off the music he plays all the time and look at her via the mirror on his suit.

The sound design, including the processed dialogue, is as critical to the success of the film as the visual effects. In space, without air to transmit sound waves, there is silence. Cuaron has to deploy the excellent score by Steven Price and synthesised sounds to convey the emotional temperature of the action. By the time the film has become a one-hander, at the climax of Stone's (and our) exhausting, suffocating and finally exhilarating journey, her declaration that it's been one hell of a ride carries a remarkable emotional punch.

For me, the one false note is the soprano vocal ever rising as the film fades to black, but I can forgive the director this minor transgression because of the beauty and excitement of what has preceded it. Kubrick wanted a space ballet in 2001, and he delivered. Cuaron does something similar, but with 3D, and amazing choreography of helpless human bodies at the mercy of shattering space debris, he is able to hurl us from the centre of the dance and out again as if we're riding a waltzer loosed from its fairground anchors.

If you're not a fan of white-knuckle rides (like me) this is the nearest you'll get to enjoying one without provoking your phobia.