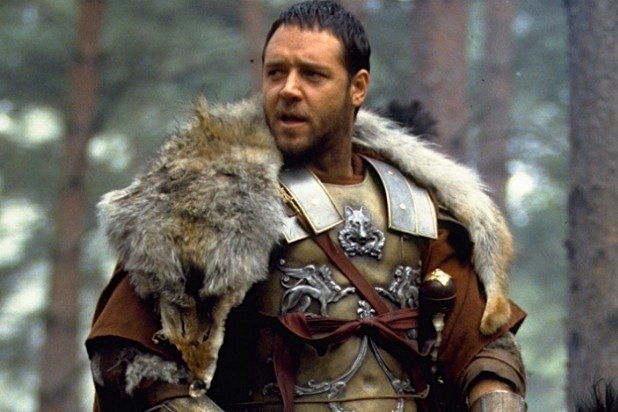 First, and most important: no CGI tigers were harmed during the making of this film - because there weren't any. There was a dummy, and publicity reports tell us that there were real 'tame' tigers involved in the shooting (of the film, that is...).

I didn't get to see this at the cinema, but I do recall thinking it was a great movie when I finally got to see it on DVD. I also bought the Zimmer/Gerrard soundtrack album (Lord of the Rings aside, it's the only OST I'd bothered with until Arrival).

Since Ridley Scott and his writers had already decided to dispense with history, it's a bit of a puzzle that he doesn't go the whole hog and manufacture something more triumphant at the climax. In fact, the climax is understated, and I'm not sure that's a good thing. The whole affair is rather coolly played, typified by Russell Crowe's gruff delivery and Connie Nielsen's porcelain skin. She just turns up in a variety of costumes to look beautiful, but there are no full throttle histrionics from anyone, not even Joaquin Phoenix's villain. There's a lot of mute tears rolling down cheeks, (Harris, Nielsen, Crowe, Phoenix) except when Crowe goes full snot when seeing his murdered family - and even then, it's part of a musically maimed montage, rather than a powerful scene in its own right. No-one gets angry; not even Phoenix raises his voice until almost the last scene. And you can't rely on the soundtrack to raise the emotional heat either. Zimmer's score burbles away quietly in the background regardless of what action is playing, really only coming to the fore in the opening battle.

But there are animals. Lots of them. Horses and dogs. Vultures and hyenas (symbols of the nature of the Roman empire, anyone?). Tigers and elephants. Falcons and CGI birds (the same ones that show up round any towering CGI building or mountain - see The Lost World: Jurassic Park and the aforementioned LOTR trilogy). If anyone was looking to run a competition to find the movie with the most animals, this one would run Dr Dolittle close. Even the music reminded me comically of The Lion King. It's one thing for film composers to derive their material from their classical forbears (especially Wagner and Holst for the battles), but to derive from your own back catalogue looks...er...sounds like laziness.

It occurs to me that the feel of Scott's movies are all the same. Slow, detached, deliberate. He does have some fun in The Martian, which engages us much more, but even there, Matt Damon's character is a calculating scientist who methodically organises his life on Mars as if he knows he's going to be rescued. I'm struggling to think of any others fun movies by Ridley. Well...Legend...A Good Year?

If you're in the mood for detached, Scott's your man. But if you're wondering whether it belongs on the 1001 list...well, I did like it when I first saw it and loved the score, but twenty years on, I think I've already run out of interest, and I've only seen it three times. The opening battle is well staged, the photography is brilliant, the sets are a marvel, and the story engaging enough, even if Maximus's quiet determination to get personal revenge is undermined by his apparent wish to launch a political coup, dressed up as respecting the wishes of his 'father'. Oh, and there are some classic lines from Richard Harris as Marcus Aurelius:

"Commodus will accept my decision," he says, shortly after pointing out to Maximus that, "Commodus is not a moral man." Especially not when there's a pillow to hand.