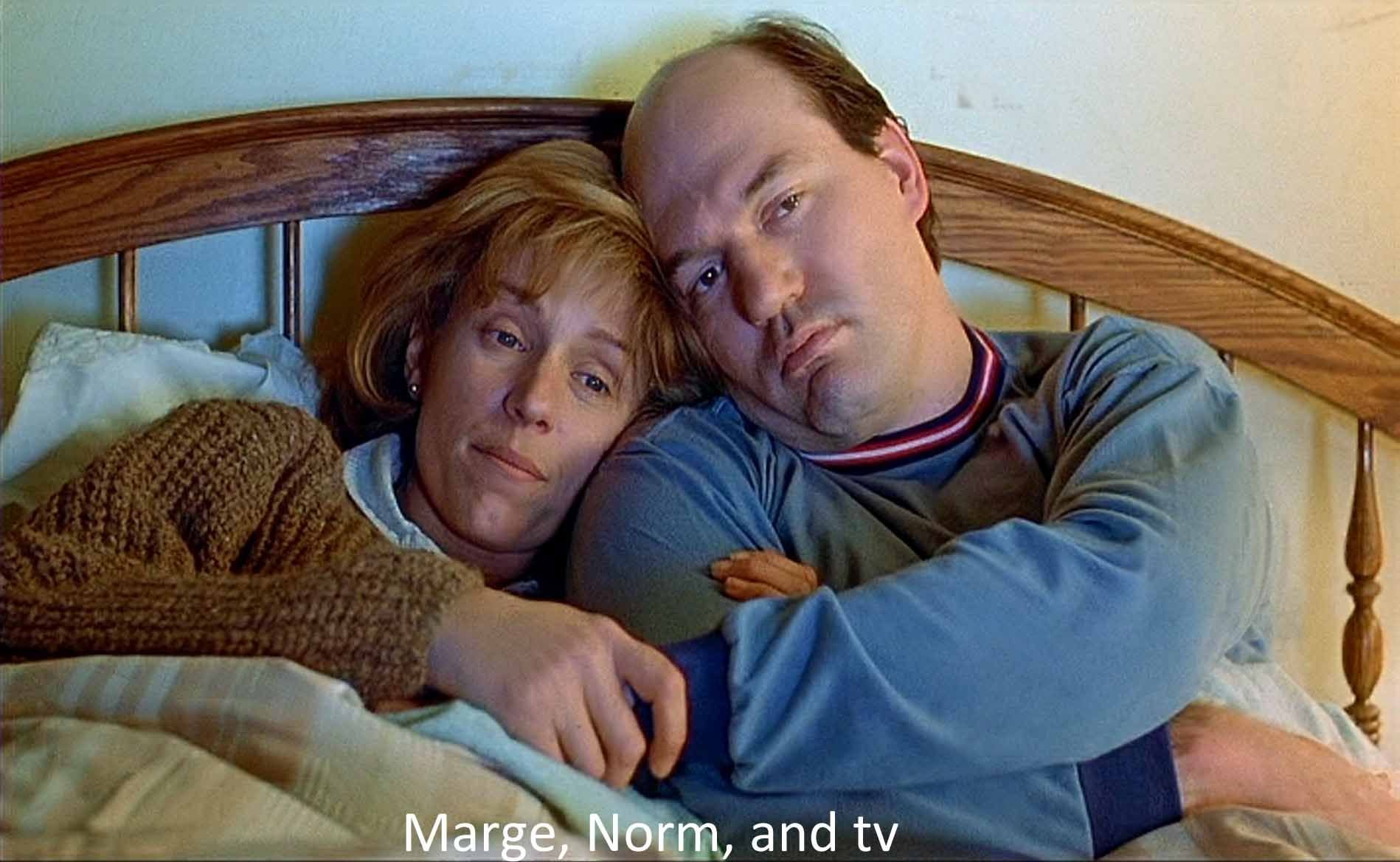 Recommended to see this by my in-laws, I caught up with it on DVD in the early 2000s. It was fantastic. Uncomfortably funny, ghastly, graphic and surprising, the central portrayal of a Good Cop and her ever-so-slightly-dull-but-thankfully-normal Norm dominated, despite the awful trio of Jerry Lundberg, Carl Showalter and Gaear (a smear of a name) Grimsrud, the incompentent car salesman and two hit men who plot to kidnap Jerry's wife so that Jerry can cover up the fraud he has been committing in his showroom.

Watching it again last night, my discomfort increased. 20 years later, in the midst of the pandemic, the violence is less tolerable. Marge seemed somehow dwarfed by the evil that surrounds her. As she snuggles in bed with Norm after her work is done, she barely smiles as she says, "Two months to go." It's as if she now wonders what kind of a world she will be bringing her child into; I simply didn't read it that way at first viewing.

You can feel the cold and the wind as you survey the desolate landscapes of Minnesota in winter. Carter Burwell's initially melancholic folk, then doom-laden score over the opening sequence (whiteout eventually pierced by a car trailing a car) emphasise the dread that is to follow. A statue of Paul Bunyan, folk hero, looms threateningly over the helpfully named 'Brainerd' where we and Jerry meet with Carl and Gaear. When Carl and Gaear drive to Fargo, a giant grey-white sky oppresses a yielding earth with their tiny car the only movement.

Later, parking lots shot from above, highways stretching to an invisible horizon add to the sense that man's survival on Earth is only grudgingly tolerated by nature. It makes the interiors of the Gundersons' home and the Radisson hotel where Marge meets with an old school friend seem all the more welcoming (unlike the overlit hotel, the Blue Ox where Jerry meets the hitmen, or the fluorescent whiteout of Jerry's office).

William H Macy plays Jerry as the fly the Gods play with (well, not quite King Lear, but you get the idea perhaps). He is a victim of his own hopelessness, incapable wearing a coat and hat without looking like a fool. It's an excruciating portrayal, his increasing desperation matched only by Marge's calmness ("There's no need to get snippy with me, Sir.) Yet any gram of sympathy I might have had first time round has ebbed away. He cons everyone around him and no justification is offered for his fraudulent business activities. His evil may not be as directly violent as that of the hitmen he has hired, but his plan initiates it, and scaring his wife and his son is unconscionable.

By the end, I found myself wondering why the Coen Bros contrived this unpleasant story. It may have been beautifully shot and excellently acted, with their customary playful dialogue and wry humour, but I was left with the depressing feeling that whatever 'good' there may be in Marge and Norm, they were surrounded by a cast of characters of reprehensible morals.

The American Dream is in retreat.

Yes, she is fantastic. No, she isn't 'comically ordinary'. To suggest that Marge is 'comical' in any way is to undermine her character. There is comical effect in the juxtaposition of the ordinary against the bizarre (eg Marge's morning sickness causing her to bend down to 'barf', while her sidekick thinks she's spotted evidence in the snow).