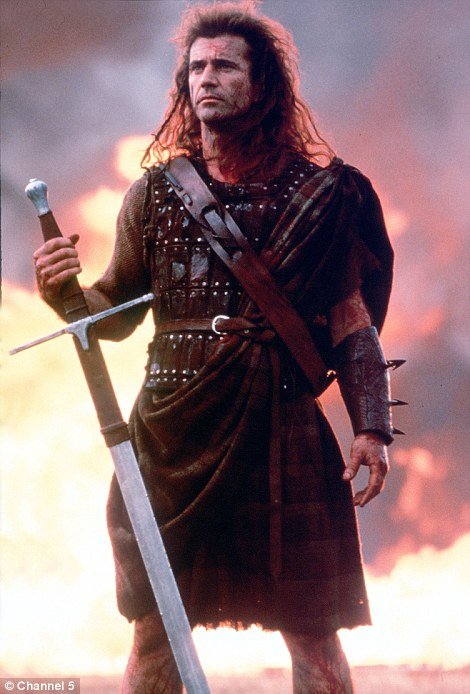 Well, as that well known Scot, Magnus Magnusson would have said, "I've started so I'll finish!"

Actually, Magnusson was not a Scot, but lived in Scotland for most of his life. He was born in Iceland. I mention him for two reasons. First, he wrote Scotland: The Story of a Nation, so would have known the truth of William Wallace's contribution to Scottish nationalism, and acknowledged that my mistruth about his nationality is a minor misdemeanour in comparison to the major liberties taken with the truth by director Mel Gibson.

Second, one might require the determination implied in his famous saying from Mastermind, because it starts very unpromisingly with long takes of not much in particular. Well, I suppose the Scottish glens are something spectacular, but there's a story to tell and Gibson drags his feet at the beginning, sketching out Wallace's childhood in order to account for his later hatred of the English, and of Edward I in particular. An early scene has us staring with horror at a roundhouse full of bodies strung from the roof, though there are that many, you wonder at the size of Scottish peasant homes. I didn't actually try to count them, but I certainly had time to, and the young Wallace had time to check each corpse for what every Scot wears under his anachronistic kilt.

To be honest, I started this review half way through watching, and I have no desire to go back to complete my viewing. The departures from history (Wallace went nowhere near York, for example) overcame any benefit from seeing Gibson's cheeky glint as his only weapon in winning over the audience.

I would obviously fail miserably on Mastermind.

Disagree: "exhibits a flair for the mythic that balances the sadistic and partisan excesses." Well, I wasn't getting balance at all.

Agree: "a film made with passionate gusto and heart [...]"