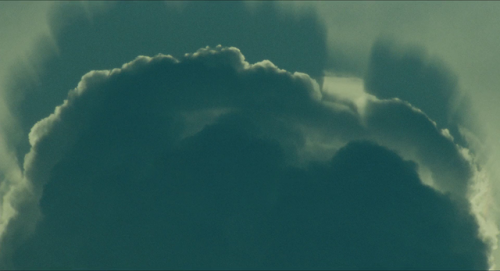 "quite possibly one of the greatest ever made [...] certainly in the top ten."

"The performances range from brilliant to something resembling utter perfection."

There's no denying the beauty of the costumes and cinematography of this film, but the praise heaped on it seems extravagant. I didn't see it on release, though I was aware that it was a critical success, so I had high expectations when I settled down to watch the Blu-Ray this week. I suppose I should have known better, given that when I finally saw Seven Samurai for the first time only last year, I was similarly disappointed.

The story, based partly on King Lear, is unremarkable. A warlord in the time of the Samurai, Hidetora, decides he's had enough war, and gives up his power to his three sons. Cue the unsurprising squabble between them, exacerbated by the old man's determination to hang around with his unruly retinue and complain that no-one shows him enough respect. There's a lot of formal shot composition, clouds and smoke, slow acting, Meaningful Tragic Dialogue (though without any of Shakespeare's poetry) and, like Andrey Rublev, horses. The review in 1001 Movies was written by David Del Valle, who claims (possibly at the time, so he could be forgiven for not foretelling the future) that the battle scenes 'are unequalled to this day'. I think they have been now (at least by the Battle of the Pelennor Fields in Return of the King though there is an argument to be had about the use of CGI as opposed to marshalling real horses and man), and in any case, by 1985, I might have expected something better than the battle in Andrey Rublev, (1969) which it did not equal in horror (though there was much more carmine pink gore).

Del Valle's claims that "the performances range from brilliant to something resembling utter perfection,"  is unwarranted hyperbole, though I agree with him that the most interesting character is Lady Kaede, (whose role has been imported from Macbeth), the scheming daughter-in-law of Hidetora. The problem for me is that Hidetora just comes across as a stupid old man, the three sons are more or less indistinguishable, and the fool Kyoami laughs, cries as if in pantomime, and gives up his alleged wisdom without seeming in anyway as insightful as Lear's original.

Reading various reviews, contemporaneous and more recent, it's clear I'm in a minority. Kurosawa's reputation is virtually unassailable, and this movie is regarded by some as one of the Ten You Must See Before You Die. Yet none of them are able to give any particular reason for its status other than making grand statements such as "the greatest living example of all that an author of the cinema should be" (Fellini). This is nonsense. Filmmaking requires not just mastery of the technical side of production, and pretty pictures, but a sense of story and character and both of these can be wielded to different effect, depending on the aims of the director and his writers and producers. Whilst Ran can stand on its own merits, there are many other films (1000 at least according to Schneider's bible) that offer completely different takes on 'the meaning of life and death', told in different styles for different audiences and are just as worthy. It's one thing to claim that a film belongs alongside the other 1000; it's quite another to insist that it is head and shoulders of almost all of them. (I note that it isn't in the BFI's last list of the Greatest 100 in 2012).