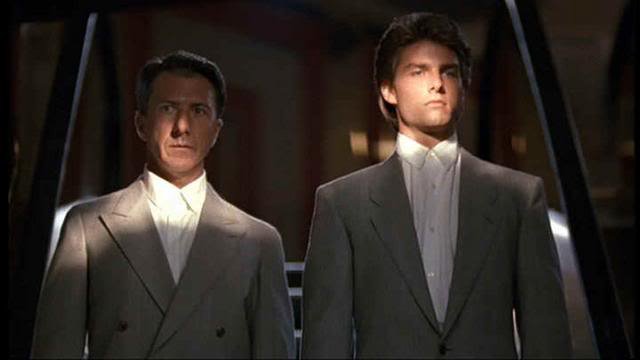 I missed this on release, and have only now caught up with it, though I was somewhat familiar with the story and some of its trademarks, thanks to cartoon parodies.

In 1988, I suspect the telling of a story about a man with a significant disability was still thought to be a little risky (though it was not without precedent). Now, in 2021, it's riskier still, with so much potential for its portrayal of autism to fail to respond to the pressures of our media and our increasingly fractured views on diversity. Even the casting of an actor without the disability (at least, as far as I know) would raise an eyebrow.

I can't speak about the accuracy of Dustin Hoffman's performance as Raymond, a man with autism, but it struck me as consistent and was totally watchable. Equally entertaining was Tom Cruise as Charlie, his younger brother, a dodgy dealer in car sales, who seemed just as absorbed in his own world, and upset by Raymond crashing into it, as Raymond is trapped in his and frightened by his unexpected withdrawal from the safe haven of the residential facility that had been home for many years.

I didn't expect it to turn into a road movie, but that enabled the pair time to get to know each other over a quite leisurely period and in neutral locations. Like so many other odd couple tales, the ending was not entirely unpredictable, but it was somewhat abrupt, and distinctly unsentimental. If the screenplay ever led anyone to suspect that there would be some kind of full scale emotional reconciliation, they would be confounded. Neither Hoffman nor Cruise let up for a moment to play to the camera, or turn on the melodrama.

Is it right to make entertainment from watching 'screen autism'? It was difficult to put this question aside while I was watching, but because the direction of travel is so wholly towards embracing Raymond for what he is, without pity or mawkishness it seemed to me a valid film. There were moments of tension and alarm (the burning toaster, the card game) and uncertainty (the girlfriend kissing Raymond in the lift - what was that about?) but the pauses to admire the American landscape - both the glories of nature and the tacky 'burbs and roadside stops - felt like a reassuring paternal pat on the head. In other words, this film was not going to introduce any jarring or untoward elements.

It won Oscars for Best Picture, Director, Actor and Screenplay, but it has since acquired only a modest score (65) on Metacritic, the aggregate dragged down by some fierce criticism from such as Pauline Kael. Kael has a point, I think, when she says that the plot is 'rigged' at the point where they make a killing at cards, in contrast to the rest of the film's quiet and understated tenor. I am less inclined to agree with her rejection of the claim - echoed in Schneider - that this is more about the conversion of Charlie into a more humane being. Hoffman's role may be the more eye-catching, but as Kael herself recognised, it was a monochrome performance, enabling Cruise to take centre stage.

Actually, the book offers little comment, mostly facts about the film's production and plot. "Most impressive here is Cruise, who [...] expertly depicts a shallow man who finally finds some depth in his life..." it says. Apparently, that's the main reason for watching. Are there are other less relevant movies about shallow men? Nothing springs to mind, but I'm sure I'll come across one soon enough. I agree that Tom is impressive, but Dustin is equally so, and deserved his recognition.