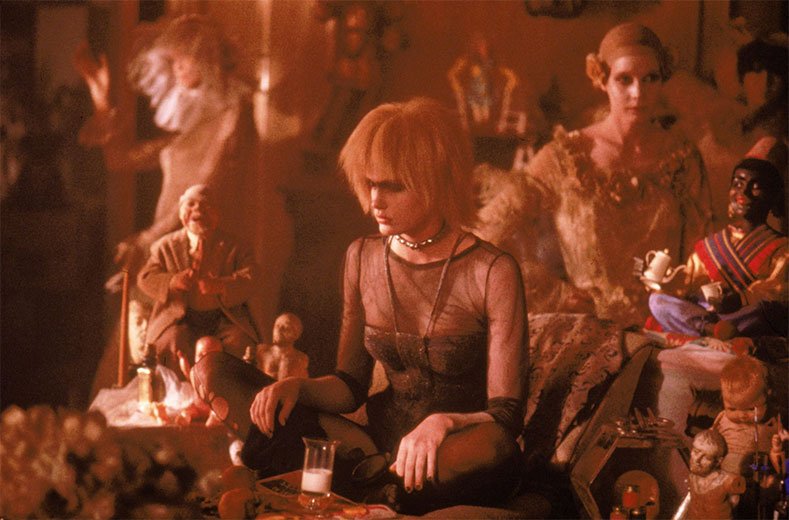 When some of the most important things that are said about a film are the problems of production, and the creation of cult status due to the multiplicity of versions in circulation, surely one begins to doubt that it belongs in the pantheon of the unmissable.

In 1982, none of the great future dates (1984, 2001) had yet been reached: the future was still all in the future. I saw this on release in 1982 and was mesmerised by the production design, Sean Young's beautiful Rachel, Harrison Ford's vulnerability, the automata designed by JF Sebastian and the Vangelis soundtrack.

The story itself seemed less interesting, and subsequent viewings (few and far between as it seemed not to have been on TV very often) have not improved matters. Much is made of Rutger Hauer's Batty (a suitable name for an unhinged replicant) and in particular, his line about "Attack ships on fire off the shoulder of Orion...". Even more is made of the idea that Ford's Deckard may himself be a replicant. For me, the notion is irrelevant. A rather simple script plays with the standard Romantic/sci-fi trope about what it is that makes us human if robots can be designed to be para-human; should they not enjoy the same rights as their makers?

The fact is that our hero is a sheriff in a lawless LA who has to round up the outlaws, and we root for him as much as we do Gary Cooper in High Noon. (Or he's a Marlowe or Spade in a noir 'Frisco). There is insufficient subtlety in the screenplay to make room for much ambiguity, and the three junior baddies, two of whom are quite unattractive characters who do not garner much of our sympathy, are dispatched fairly briskly, although Zhora does get to stumble through an inordinate amount of sugar glass.

Batty's murder of Tyrell, more or less gorily depending on which version you watch, hardly endears him to the audience either, so the conclusion is a blessed relief.

Most recently, I watched the "workprint" version. This being 2022, the envisioned 2019 is somewhat wide of the mark (though I'll admit I've not actually been to LA, I can claim to know something about the year!) and CGI has accustomed us to standards of effects that mean they are no longer special. Some of Douglas Trumbull's creations seem poorly executed (though that is also true compared to the same technician's excellent work on Close Encounters of the Third Kind four years earlier!). Perhaps I should have chosen to revisit the Final Cut to make a fair assessment, but I'm not sure that there was much difference in the dialogue.

In any case, much of the film's beauty comes not from the trick FX (models, vehicles, rotoscoping etc) but the music, the lighting, the slower pace, the use of smoke and rain, the voluptuous costume. One of the most striking shots are of Rachel lighting a whole scene with a cigarette, translucent nails , swirling smoke, fur coat, glossy lips and shiny hair. It's the equal of anything captured by the black and white masters of the silent era: Sean Young is a Technicolor Louise Brooks. This may not be quite as luminous in the workprint, but it is nevertheless utterly gorgeous.

Finally, I'm prompted to reflect on the difficulty of judging a film's worth when it is meant to be seen on the big screen via a 70mm print, and I'm instead watching it again on my 32" TV, interrupted by the phone, the dog, visitors, my stomach and bladder...

I should make allowances for the way time can dim memories and instead be satisfied that I recall being mesmerised 40 years ago and that's enough to warrant its inclusion in the 1001.