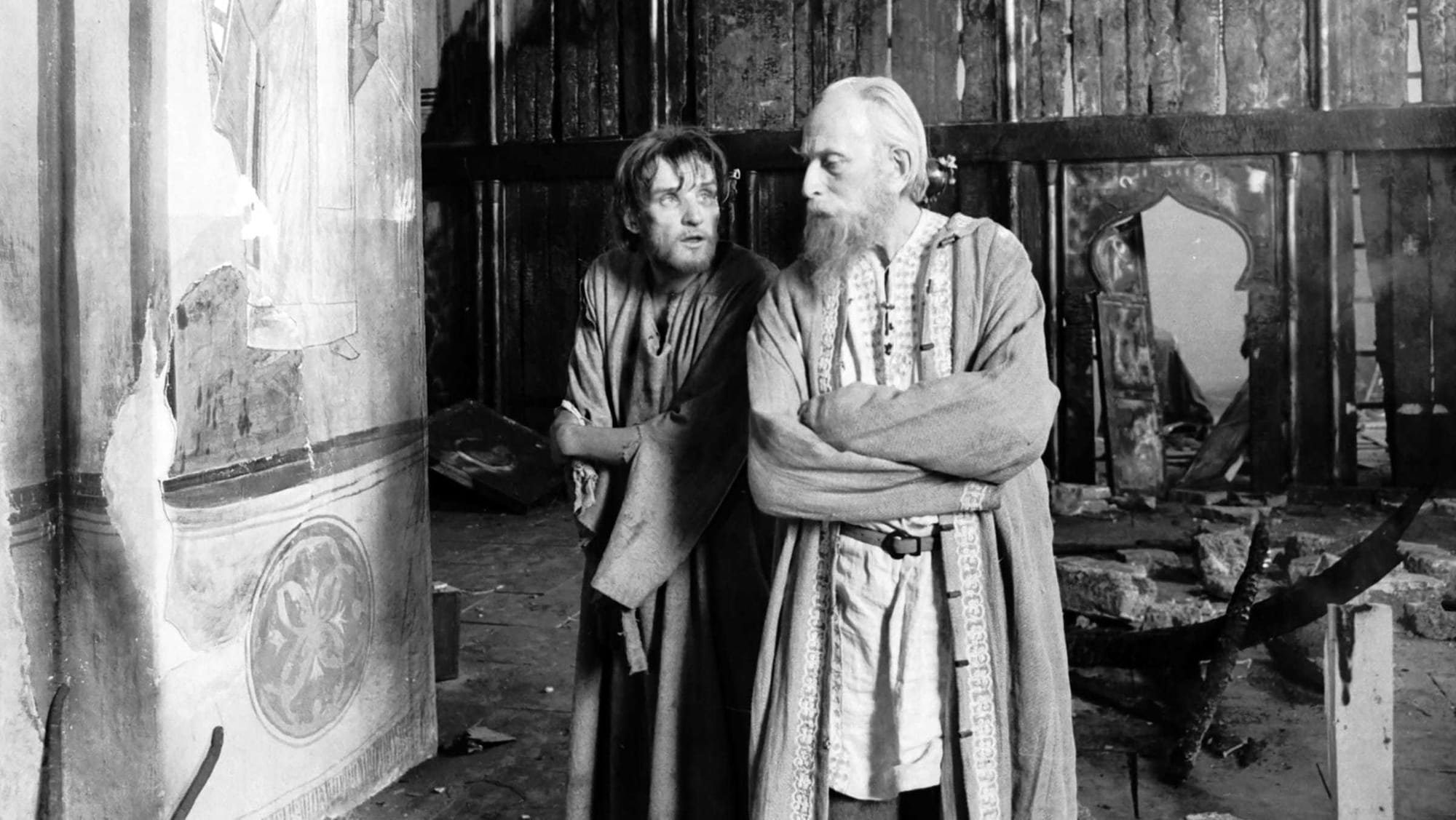 Finding this movie quite incomprehensible, at least at the beginning, I was greatly relieved to read an article in The Guardian which said, "Few characters are clearly identified, little actually happens, and what does happen isn't necessarily in chronological order. Its subject is a 15th-century icon painter and national hero, yet we never see him paint, nor does he do anything heroic. [...] From the first scene, following the flight of a rudimentary hot air balloon, we're whisked away by silken camera moves and stark compositions to a time and place where we're no less confused, amazed or terrified than Rublev himself."

So, it wasn't just me. This reflected my experience almost exactly. However, I became increasingly absorbed, drawn in less by the plot or characters, as by the mesmerising camera work. I had previously seen Tarkovsky's Stalker, so I had some idea of what to expect - and to tolerate. For example, both movies have key scenes where two or three exhausted, or depressed, or anguished men (notably not women) argue, usually quite civilly, about some aspect of their life's work, against a background of desolation, destruction or decay. Flooded or burnt, rusted or corroded, ruined or bloodied.

The civil arguing is one example of Tarkovsky's films' tendency to a flat emotional tone. There are occasional scenes where a character gets agitated, but mostly, the participants in the drama act with a peculiar philosophical resignation. This is particularly noticeable in Rublev during the centrepiece assault on the town of Vladimir. Despite what is at times quite a gruesome, though discreetly filmed barbarity, neither the attackers nor the defenders demonstrate extremes of rage or sorrow. Even the tortured priest seems to accept his lot with a melancholic resignation. I couldn't decide whether this is aimed at representing the familiarity with hardships and death that must have been the daily experience in the 1400s; or the intention of the director to prevent the audience from having an emotional response: he wants us to focus on the philosophical. (Is that the influence of Brecht? I can only dimly recall his concept of alienation, but it's like the Russians, isn't it? They excelled in borrowing German philosophy).

That said, I'm not going to pretend that I necessarily understand what Tarkovsky is going on about, philosophically speaking. Why make a film 'about' a legendary painter of icons and spend little of the film either looking at icons, or watching him at work? In fact, it was some time before I twigged which one was Rublev (though this might be partly due to my not recognising any of the actors. If only he'd cast Max Von Sydow as our hero, I would have found it all so much easier to follow, I'm sure. On second thoughts, given his work with Bergman, maybe not. Maybe...Paul Newman.)

Returning to the absence of women, their lot seems to be confined to bearing, rearing, losing children, or not. They seem to be second class victims. The men lament the unfairness and mystery of life, and this is their prime directive: to be first-class victims of the tyranny of existence.

I was braced for what I was told would be a startling climax, as the film moves from B&W into colour, and we finally get to see the icons. I'm afraid it underwhelmed me. Rublev himself argues the futility of creating art when daily existence is so terrifying, so if we were meant to get some sense that, despite all the horror, "Look what man can do, transcending his suffering to worship the transcendent" - I'm not buying it.

Was it any good? Well, for me, one viewing is enough. I admired the scale of the action sequences.  I liked the bringing of background textures (water, wood, trees, snow etc) into the foreground, as if they were actors as important as the humans (the cinematic equivalent of 'ambient'). But I doubt I shall watch it again, and I'm sure I will find a more profitable way to pass three hours in front of the silver screen.