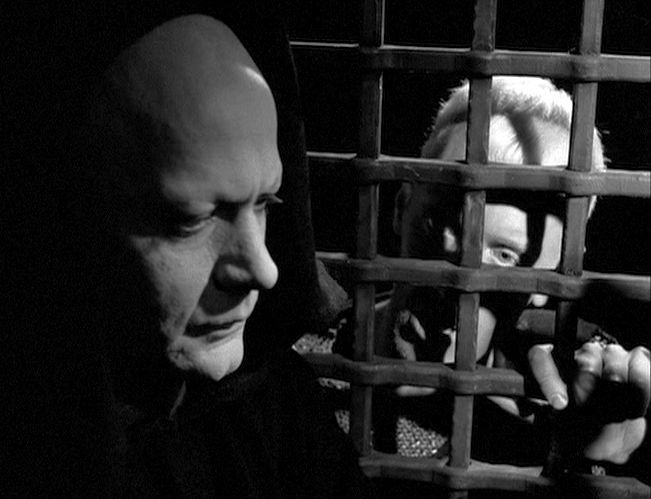 Antonius Block is a knight returned from the Crusades with his squire (more jester) Jöns , to a homeland ravaged by Black Death. Death personified comes to collect him while they rest their horses on a deserted rocky beach. Block persuades the Grim Reaper to play chess with him, and for as long as he can continue to play, he will not die.

We follow Block and Jöns as they make their way to a church; to an inn; to an encounter with travelling players and a procession of flagellants; and with a woman in the stocks, condemned as a witch. Together with a young woman rescued from assault by Jöns, and a blacksmith lamenting the loss of his wife to one of the players, the entourage begins a journey through the woods to where they hope to find safety in another village.

The journey of the film, however, is more philosophical than physical, as the knight reflects on his Crusade experiences and his waning religious faith. Jöns plays as fool, chorus, critic and realist. "It's always your own arse you sit on" he says to the artist painting the Dance of Death on the walls of the church. The players, especially Jof, Mia and their son Mikael, present to the knight a challenge, as they seem to have found an innocent earthly happiness, untouched...as yet...by the plague, and not drawn to fret about the afterlife or the existence of God.

The black and white photography is mostly unspectacular, but in some sequences, the contrasts and shadows throw startling highlights on what is a steadily paced but thoughtful essay on the meaning of death, such as when Block gives his confession (and his secret chess strategy) to the priest who, he fails to realise, is Death.

There is nothing hurried about the film, nor overly dramatic or tense, except perhaps when Jöns asks the way of a man sat with his dog by the cliff edge path. Jöns grabs at the man who remains silent, only to see that he is dead, the eyeless face swung sharply into camera with a jolt. In fact, there is humour - even from Death, who boasts of his ability at chess - humanity and warmth in the characters, and the moments of violence are muted (this is a PG after all).

Definitely worth seeing, more for what it actually is, than for what its false reputation would have us believe.