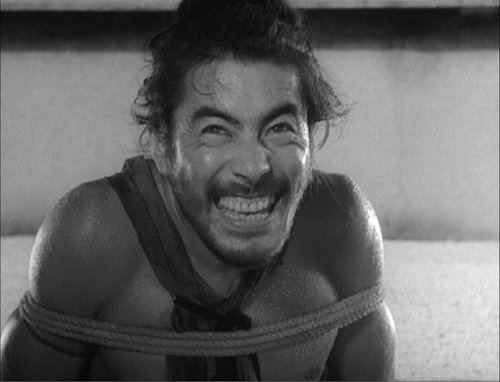 This is the third film from Japan that appears in the 1001 list, all by Kurosawa, and the third that I have found, well, less fantastic than I think I'm supposed to. It seems to me that their style is an acquired taste.

The cinematography is fantastic (though I take issue with the idea that it can be described as 'flawless', as some critics have.) The textures, movement, composition are hugely satisfying, making the film a pleasure to watch, at least on the surface. What I struggle to get past is both the acting style - which entails one or more characters laughing hysterically at frequent intervals - and a story where character motivations seem trivial. In particular, the central characters to the alleged crimes (murder and rape) - the bandit, the woman and her husband - are motivated so much by their dignity that they descend in to a vortex of shame and counter shame about...about what I am not sure. This becomes even more significant as each character tells their version of events in turn, and then finally - and, apparently, conclusively - by an independent observer. So much doubt is cast on what happened, that one might almost believe that no crimes were committed at all, and in any case, it's all about the abandoned baby and the stolen dagger.

In short, who cares?