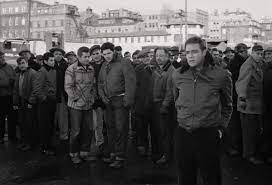 "Searing and tender, it ushered into Hollywood, a new kind of hard-hitting social realism"

"Searing and tender" - Yes. I can't comment on its ushering in anything, but the realism was cleverly contrived.

Of the movies new to me so far (at the the time of writing, I've roughly 70 films watched and reviewed, so a very long way to go), this is perhaps the best, and is undoubtedly one you must see.

What I found most striking was the cinematography: black and white tones lending a sombre atmosphere (though doubtless Scorsese could do a decent remake in colour) to wholly stylised framing, especially of the faces of the supporters on each side of the confrontation (the Mob and the Dockers). I was familiar with Brando parodies and the famous lines ("I coulda been a contender."), but not with how good he actually was, nor how natural his performance.

It's also difficult to watch without being aware of some of the history (such as director Kazan agreeing to testify to the House Un-American Activities Committee about alleged communists in Hollywood; and the controversial nature of Brando's subsequent celebrity). The music (Leonard Bernstein) too was not flawless. Described by one critic as understated, it seemed to me overstated at times, particularly during the more tender romantic scenes between Brando's Terry Molloy and Eva Marie Saint's Edie Doyle.

But some of the speeches and scenes were riveting: the priest Fr Barry (Karl Malden) giving a 'sermon' from the hold of a ship where a longshoreman had just died; Terry arriving at the Mob's bar, looking for the mobster Johnny Friendly (Lee J Cobb) after his brother had been killed; Terry and brother Charley (Rod Steiger) in the back of a cab; the moving climax, when we're desperate for Terry to get up and walk (and for the dumb dockers to grow some balls!).

I wonder whether 50s audiences would have accepted a more downbeat ending, the one I was expecting (raised on 70s cynicism). If the script had a flaw, it was that Molloy took on the mob and won. The broad smiles from Edie and Barry at the end seemed out of place in a film where most faces were stony blank, snarling or frowning, and the sudden change of attitude of the sullen, cowardly workers was nothing short of miraculous.There's an irony in the claim that this was 'realism' and 'naturalism', yet the contrived staging, formality of framing, and 'happy' ending make it anything but real. It's a fairy story. None of this diminished its power.

Anyway, what were the pigeons about? Were they the longshoremen, helpless, needing constant care and attention; or their aspirations to be able to work everyday, bring home the bacon, and support their families without being indebted to the Mob?

And the constant packing of the frame with faces. The crowd scenes were very carefully choreographed. It's as if the crowd was a character in the play too - like a Greek chorus. The difference was that this chorus was silent. They watched, but had no agency until the very last scene when they finally turn on Friendly. 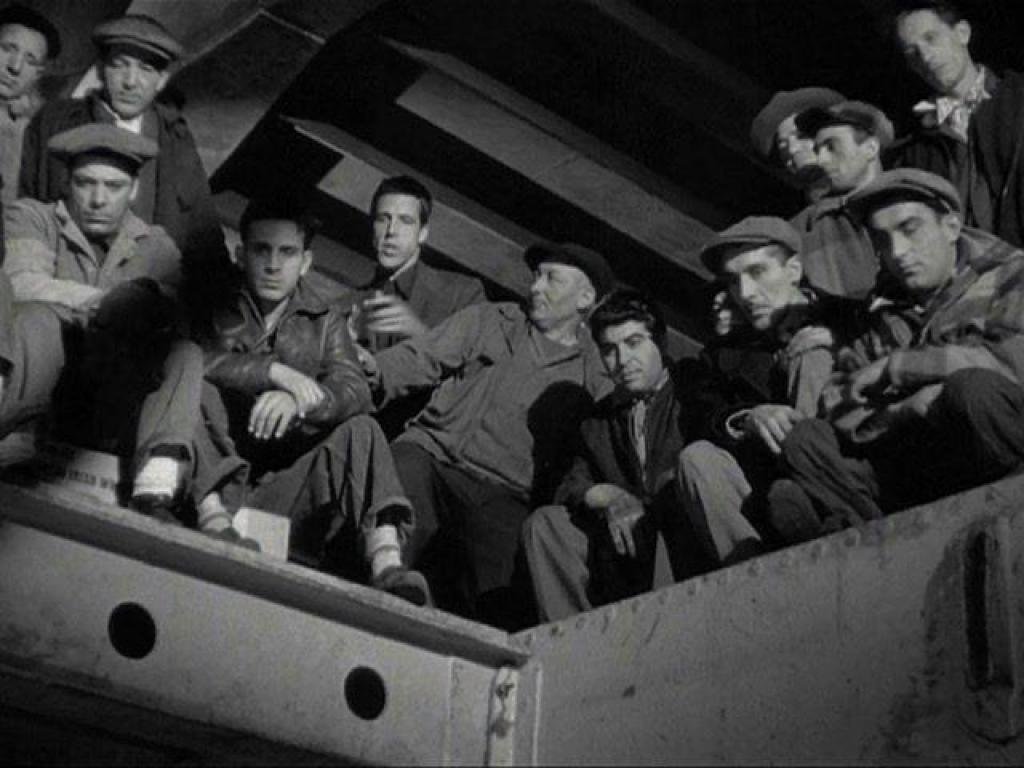 See all those closed mouths? What the mob call compliant dockers - "D and D" (deaf and dumb). The only one with the open mouth is the uncredited Fred Gwynne (Car 54, Where Are You, The Munsters, Coppola's The Cotton Club) as one of Friendly's goons.

Lastly, I want to comment briefly on how cinema is able to manipulate audience feelings, especially the less admirable ones. I so wanted Edie to punch Friendly in the face as he walks, bloodied, but apparently still in charge, up the gangwalk past her and Barry. I was disappointed that she didn't, and nor did any of the dockers. It's an emotion that has been stirred by more than one film in the past. I'm thinking, for example, of Fatal Attraction when Michael Douglas finally thumps Glenn Close's antagonist, Alex Forrest). It may be only human, but it has the effect of diminishing any intellectual argument that the director may have been compiling through script and image. If solving problems boils down to action prompted by a base emotional response, why bother with a script, or carefully balanced characters representing different viewpoints, or visuals intended to convey supporting messages?

Enough. It's a great movie and deserves a better memorial than one based on the parodies it's attracted.