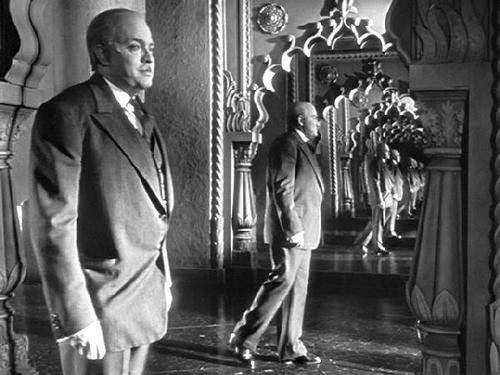 How can we trust the picture painted of Charles Foster Kane when all that is shown of him is from the viewpoint of those who loved, loathed or lived with him?

And does it matter?

Who is Kane that we should care about him?

It occurs to me that It's A Wonderful Life is a bittersweet antidote to the dark and empty edifice Welles builds for our entertainment. I wonder if that film's director, Frank Capra, had Kane in mind when he opted to tell the story of an ordinary man who loses his ambition but inherits the love of all who met him, rather than a millionaire tycoon who loses his childhood and never recovers. There's even a scene with a sledge in both!

There is much to admire in Welles' work, especially the fantastic cinematography (Gregg Toland) and art direction (Van Nest Polglase). Welles himself dominates the early scenes as the new owner of his first newspaper, The Inquirer, but he is diminished by his fall from grace, becoming a shell of a man, and hard to like.

Perhaps the most striking scene, in more ways than one, is Kane's trashing of Susan's room. With what might be poor make-up, or deliberately fake balding, Charlie staggers round the room in a curiously wooden rage, almost unable to actually break anything in his impotence. Ironically, it's one of the few scenes to carry an emotional charge, despite his seeming like a puppet, incapable of escaping his strings.

His obstinate refusal to give up on Susan is perplexing and only adds to the feeling that Kane is not someone to like, and as a "Citizen", he falls somewhat short of what that title implies we should expect: a story of a fine upstanding pillar of the community.

For me, the film has no heart, the problem being that there is no one to like. Not whiny Bernstein, constantly poked fun at by Kane; nor the fool Leland, more interested in cigars in his sanatorium; nor Susan's failed and washed-up opera singer who starts vacuoua and ends up vindictive. And Kane himself whose naivety, in love and in politics, makes him look foolish.

The final scene as Kane's belongings are boxed up or thrown on the fire is, however, disturbing: a man's spiritual and emotional life is reduced to his belongings, much as Scrooge sees the charwoman, laundress and undertaker picking over his belongings in A Christmas Carol. That miser fortunately finds redemption. CF Kane is not so lucky.