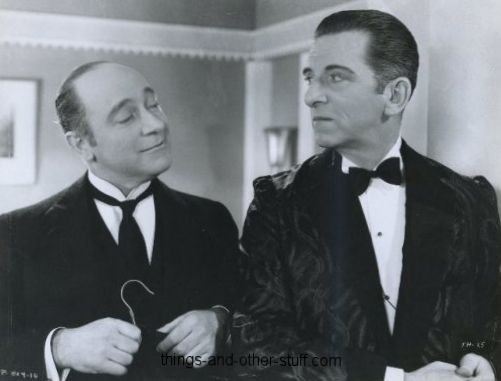 I recall the BBC running a season of Fred Astaire films during the 70s, and I fell in love with the style of these musicals. Plots silly to the point of absurdity, ear-wormingly memorable songs, graceful and exciting dance routines, all style with little substance, but hugely entertaining. I also remember being slightly disappointed when Ginger Rogers was not his partner, which was a bit rough on some of the other stars he performed with.

Watching Top Hat again today gave a chance to look again at that enduring partnership. However, I was most struck by the contribution of the supporting cast of Edward Everett Horton, Eric Blore and Helen Broderick. Without their propping up the plot, the Fred and Ginge romance would be so much less substantial. Astaire may be a likeable cheeky chappie, but with or without Rogers, he's only there to dance and sing - with incredible style, of course - not to act. It's the interplay between the whole ensemble that elevates an ordinary tale of love thwarted by mistaken identity. The song and dance routines may be the raison d'etre, but without the Best Friend, the Butler and the Wronged Wife to flesh out the story (not to mention the caricature Italian, Beddini) the film would have neither brains nor heart.

And then there's the style - putting on the Ritz. Do such huge hotel rooms actually exist anywhere outside Hollywood? If they do, they are in the most hopelessly financially inaccessible places that a regular musical audience can only dream of visiting. Thus, the top hat of the title, a symbol of wealth and style.

If I was a Marxist, I might have have some sober fun with an analysis of the social injustices embedded not just in the film, but in the envy of the filmgoer. Instead, I'll confess that the escapism of Top Hat is more likely to keep me coming back for more, than either the po-faced comment in weighty social dramas, or the indigestible meaningfulness of the arthouse.