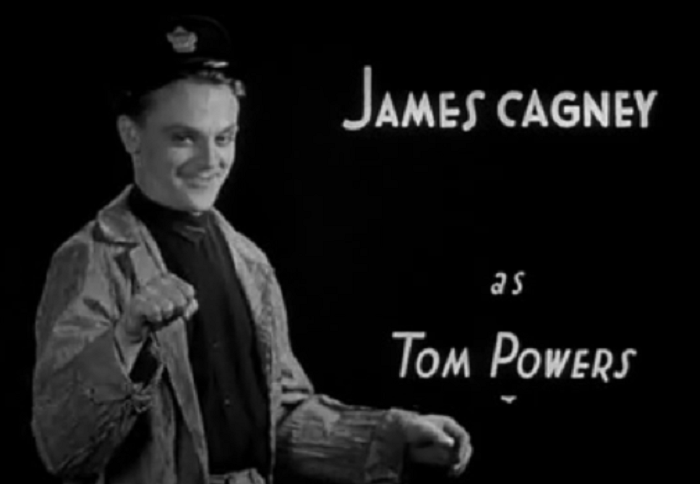 The compelling but unsympathetic story of Tom Powers and his rise from juvenile delinquent to merciless hoodlum is an odd movie. It has strangely sparse set decoration, Cagney's acting consists of wicked smiles and friendly punches on everyone's chin or chest (mother, brother, bessy mate, broads, gang leaders, intended victims) and some curiously incongruous camera angles which draw attention to the otherwise run-of-the-mill cinematography. When Tom argues with his brother, Mike, we're treated to a startling sequence of over-the-shoulder shots. Later, we can see the deep trench dug to house the camera watching as a truck drives overhead, leaving the gang's hideout. And in the last scene, when Tom finally comes home, he falls down towards a camera looking up at him from floor level;

I'm not clear why this gangster flick deserves its special place in film history. Most writers insist on mentioning the notorious 'grapefruit in the face' scene, perhaps because violence against women was scarce in the movies at the time. Yet other scenes of implied violence are seemingly  overlooked, as when Tom and his partner Matt go round to kill "PuttyNose", a tense, drawn-out and uncomfortable sequence when the victim tries to play the piano to recall the jolly tunes he used to sing with them when they were young criminals-in-arms.

Oh, and the roller skates and polar bear? Matt's sister is wearing the skates when we see a young, mischievous Tom plotting to trip her up. It tells us that he's not just a tyke, but that he has no qualms about visiting misfortune on the fairer sex...especially with grapefruit. The polar bear (stuffed) surprises him and Matt on their first robbery in a fur warehouse, and leads to his first killing: a cop.

Unfortunately, the evil Tom is the most attractive character in the film, as the goodies - his brother and his mother - are thinly drawn. As 1001 Movies says, this hasn't aged well and is perhaps less essential viewing than it once might have been.