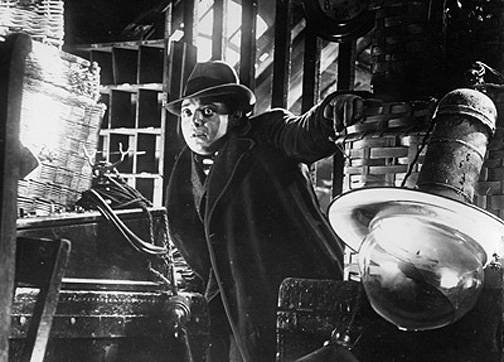 Peter Lorre's career took off in this movie, and he is rightly given credit for his performance as the child murderer, Franz Becker.

Yet much of the movie - often in interminable, dull scenes - is taken up with an examination of German society, whether it's the mothers bereft of their little girls, the beggars deployed to help catch the murderer, the criminal underworld, incompetent police and politicians, the unthinking mob seizing on the innocent and baying for justice...even the bureaucracy of the police records, and the clocking in system used by night watchmen.

Lorre is only rarely present in the first two thirds of the film, and it is difficult to follow events as there is no core character who carries forward the narrative.

Nevertheless, there are some striking images among the more pedestrian camerawork: the frequent use of mirrors and windows reflecting the actions and thoughts of various characters; the busy-ness of sets such as the knife shop window where Becker struggles to suppress the urge to pick up the girl whose reflection he sees; the balloon stall where he buys a balloon for his intended victim; the office block where Becker hides from the criminal gangs trying to hunt him down.

The luminous lighting (is that a tautology?) frequently picks out the lights reflected in Becker's eyeballs, contrasting with the shadows in which he nervously lurks. Coupled with this is some novel sound design, far superior to many of the 1001 Movies released since the first talkie.

The director is given credit by critics for his inventiveness in his use of sound, but it's difficult not to conclude that he was actually finding tricks to help him avoid scenes of substantial dialogue which was still problematic, given the lack of sufficiently sophisticated technology to synchronise sound and pictures. There are some long scenes of silence, no music at all (except diegetically), extensive use of voiceovers, and sounds of offscreen activity (car horns, people shouting) where no synchronising is required. It all works well, but this is sometimes undermined by some crude tracking and zooming, with very distinct camera wobble. I guess the dolly had not yet been perfected (apparently invented in 1927 for a Hitchcock movie).

1001 Movies praises the sound design, has little to say about the cinematography, though this is mostly a strength, and nothing about its being too long and somewhat confusing with tedious longueurs (another tautology?)

Luckily for Becker, just as he's about to be lynched by the kangaroo court of criminals as it reaches its verdict, the police finally catch up and break up the gathering. We are left with the moral dilemma of deciding whether to empathise with Becker's inability to control his impulses, or the criminals' anger at their belief that Becker won't be punished properly for his crimes, or to be incensed at the authoritarian system that runs a decayed and corrupt Germany. It is this moral ambiguity which lifts the film out of the ordinary and makes it worth watching.