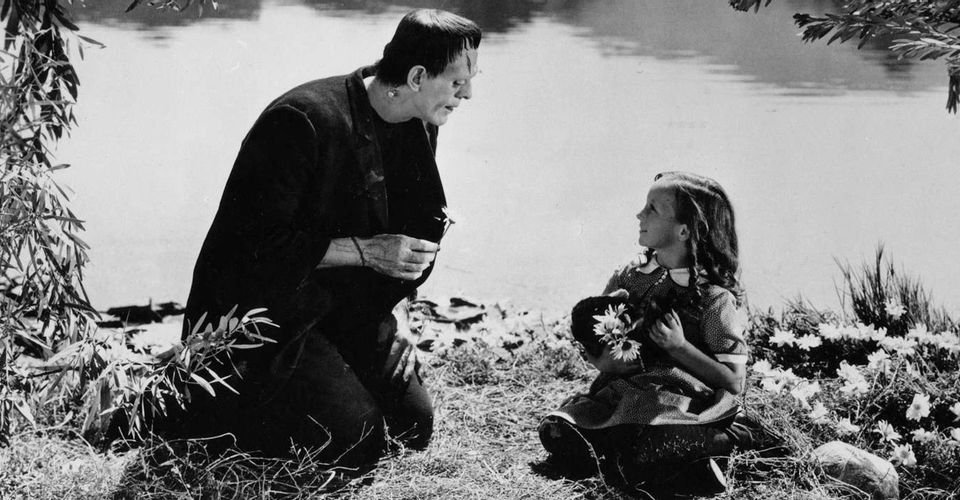 It's no wonder that the title of the film is mistakenly associated with Karloff's character rather than Colin Clive's. Although the latter does a decent job as the mad scientist ("It's alive!" x 7), the emotional centre of the picture is the excuse for a human hewn from dead flesh, born into an unkind world, completely bemused by existence, and tormented by his brainless creator and his assistant.

It's Victor (Frankenstein) who is the monster.

Director James Whale seems to have come up with a masterpiece by accident. So much of the film is dull and poorly made. The introduction, with Laemmle coming from behind a curtain to warn us of the looming horror is a deliberate ploy to crank up the fear, but this is totally undermined by the wooden acting and clunky dialogue that follows. Victor's father, Henry, Baron Frankenstein, provides bumbling comic relief, created presumably because the producers didn't want the audience frightened to death. The ending totally washes out the horror of the preceding events.

Ironically, the best sequences are more or less silent: the brain-stealing from the morgue, the child throwing flowers in the water, Igor tormenting the Creature. Whale is much more at home in the laboratory, filled with the paraphernalia of the magic of science. Dials, levers and buzzing electrical charges casting dancing shadows and blinding flashes while Clive, hunched over his "child" directs Igor to haul the operating table up to the storm-lashed tower.

That the film remains on anyone's list of greats is partly due to Karloff, proving that a stiff can act while the rest of the living cast might as well be corpses. The atmospheric lighting contributes beautifully...well, in those scenes where it matters - not in Victor's drawing room - and its being the first of its kind helped guarantee its longevity.

I don't suppose, however, that I would be the first to suggest that Mary Shelley would be turning in her grave if she knew what had been done to her classic Romantic tale.