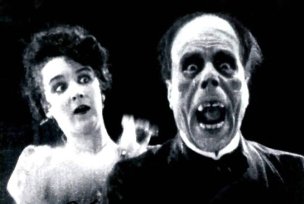 I'm sorry, but the allegedly scary sight of Lon Chaney as the Phantom does not compensate for a dull story chronically poorly acted. My nostrils are as distressingly flared and truncated as his, but I don't get all huffy about it. John Barrymore's Dr Jekyll and Mr Hyde (1920) is rather more creepy, with several simple but effective transformations.

Funny how bald men - now held to be sexy - provided two of the most iconic horror images in the history of cinema (the other was Count Orlok of course). I'm sure there are others, but I can't bring any others to mind.

What's striking is that by 1925, camera work was beginning to be liberated, acting naturalised, design stylised. In this film, the acting is risibly theatrical, as it was in Der Letzte Mann, but that was a comedy (IMO), and had some great camera work to offset it. Here, there is little of visual interest. Once we've had the Great Reveal, it's all over and done with. Oh, I suppose the sight of the angry villagers...sorry, citizens of Paris...with their flaming brands (I couldn't see the pitchforks, though I'm sure there must have been some) swarming through the sewers and around the boulevards was mildly diverting.

If operatic settings are your thing, and you're a sucker for a tale of Beauty and the Beast, (or want to see where Andrew Lloyd Webber got his inspiration from) be my guest.

Which reminds me - why isn't the Disney interpretation (of B & the B, that is) in the list? It beats this monstrosity hands down!