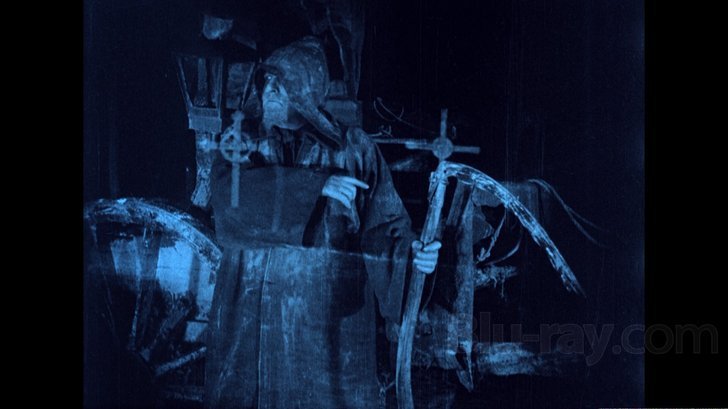 1001 Movies descibes this as a 'gritty tale of poverty and degradation', which belies the impression given by the stills and the title. This is not a scary ghost story; there are no careering carriages with headless horsemen, à la Washington Irvine. Nevertheless, it is an oddly compelling tale of an unpleasant drunkard whose misdemeanours lead him to be chosen to be the collector of dead souls for one year. We are then treated to not just his story of misfortune, but to several others, though the conclusion concentrates on his, and the possibility of his redemption.

The film is famous for its extensive use of double exposures to create the illusions of the spirit world, and its influence on later filmakers. I found it a rather stodgy tale, and can't quite see why it is so highly rated, despite its historical significance. But the climactic scenes are quite affecting, so it's definitely worth a try.

There are a number of versions on Youtube with different soundtracks (and none) and what you feel about this film may well be partly determined by the version you choose. I found one with atmospheric, ambient distorted guitars,  percussion and sound effects by KTL