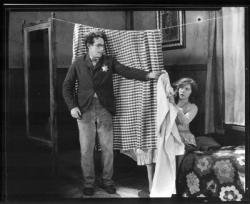 Harold Lloyd, famous for his physical comedy and literal cliff-hangers, is in more serious mode here as the kid to the Sheriff of Hickoryville and two older burlier brothers. If you can fight your way past the treacly sentiment ("Poor Harold, so put upon by his macho relatives, when he's really a Good Boy") there's a decent plot, some amusing sequences and stunts, and increasingly fluid camera work, with tracking shots that effectively highlight both the tension and the drama. This includes an amusing and inventive passage where, as The Girl disappears over a hill, Harold climbs a tree so he can hail her, three times. 1001 Movies tells us that an elevator was built to house the camera for this shot.

Note also the scene with a blanket partitioning him and The Girl, to protect her modesty and his honour - it will show up again in It Happened One Night in another 7 years! Did I also spot a borrow from Nosferatu as the strongman rises, like Count Orlok, from the hold of the ghost ship where The Money has been stashed? In fact, that sequence seems deliberately shot with German Expressionism in mind, not with crazy angles and cardboard sets, but dark with shadows and atmosphere.

I find Lloyd less than convincing as the Kid, not least because he looks at least forty, and he rather milks the pathos in a way that Buster Keaton manages to avoid. Even Chaplin gets away with it better as The Tramp. The scene where he battles the travelling show's strongman is well choreographed, but rather too long, and there is an obvious failure of continuity, when Harold recovers The Money and stuffs it into a bag twice, but the resolution of the drama is satisfying enough. However, I'm not sure about his decision, once inspired to self-belief by The Girl, to try out violence as a proof that he is a Real Man. "Right, now I know the villain can't swim, I'll try to drown him!" Not exactly the stuff of real heroes, and not really one of those movies I needed to see.