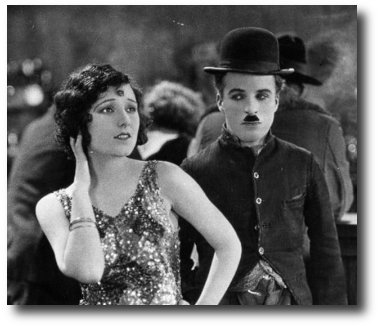 A mildly diverting tale of Chaplin's Tramp as The Lone Prospector, who never digs himself, only succeeding in sharing the wealth of another miner and winning the heart of a gold digger.

If you like Chaplin's Tramp persona, there's plenty here to entertain. He cooks and eats one of his own boots, amuses fur-coated women at the table by making two bread rolls do a little dance, but spends most of his time doing pratfalls with the three men with whom his story is intertwined.

The story is well told, but there is little, if any, invention or development in any cinematic sense - no new camerawork, for example - and the climactic gag, when the snow cabin he has been sheltering in teeters on the edge of a precipice, is rather too long.

I'm not a fan, but I can hardly complain that Chaplin appears in the list, as he was an internationally acclaimed comic and pioneer of early cinema (not least by establishing United Artists, along with D.W. Griffiths, Mary Pickford and Douglas Fairbanks Jr.)