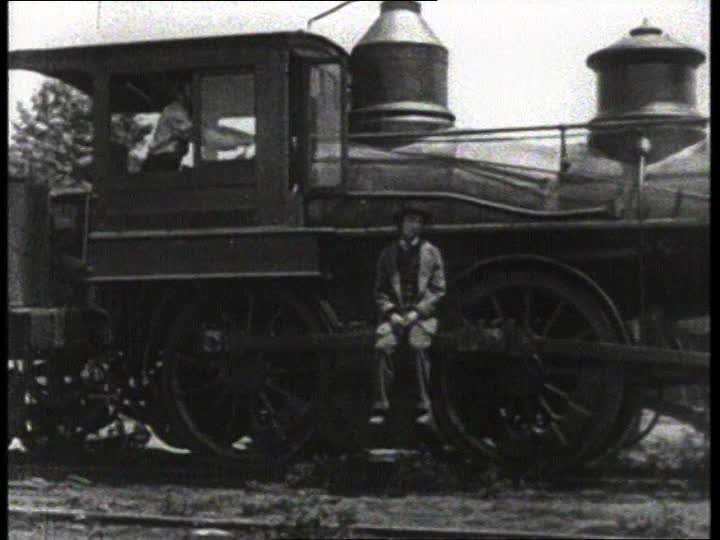 Having given in to that weakness, I'll leap forward to the movie where I first noticed what a difference different scores can make to the overall impression on the viewer.

I'd seen Buster Keaton among the rest of the silent movie crowd in Golden Silents, Silents Please and Mad Movies (thanks to Michael Bentine and Bob Monkhouse) but it was only Laurel and Hardy that I would single out for adoration. The rest...well, they just belonged to a wacky speeded-up world of endless chase gags, besuited suitors with twirling wicked moustaches and weedy women, back of hand melodramatically drawn across horrified mouth, and corny music.

I finally gave in only for this exercise, and watched The General on Youtube, with a score by Angelin Fonda. It was not one of the 'legit' versions, but I'm glad it was the first I came across. It was neither melodramatic, nor sentimental, as so many silent movie scores tend to be. Perhaps her score is little too literal, as it is as propulsive as the train chase that is at the centre of the film, but that minor quibble aside, it has the virtue of being quite unlike a typical silent movie soundtrack. Consequently, it helped me 'read' the movie quite differently, as it provided none of the traditional cues for my emotional response. I have since found that this becomes quite a challenge when watching silent era films, as so many have acquired a number of scores over the years of being captured on VHS, DVD, Blu-Ray and any number of anniversary editions. For The General, 7 variations are listed by Wikipedia, include the Fondin, with an eighth on the way.

As for the movie itself, it's fantastic, with gentle comedy throughout, and none of the ghastly sentimentality that ruins Chaplin's films. The relationship he has with his 'girl' is quite robust - she gets kidnapped, drenched in a storm, tied up in a sack and dumped amongst other freight, and even his kissing of her is somewhat rough (I was reminded of the frustrated kiss James Stewart gives Donna Reed in It's A Wonderful Life). In fact, when she shows signs of feminine domesticity as she sweeps up the engine cabin, he gets impatient with her, snatching the broom out of her hand and throwing it off the train.

In common with his other films, Keaton's stuntwork is remarkable for being both ambitious and live, in this case culminating in his crashing of a train off a bridge. But it's the inventiveness throughout that I found engaging, especially the problems he has with the mortar he hitches to the back of the train he has commandeered.

If I was going to be picky, the whole story rests on Keaton's being told that he can't sign up to fight for the Confederacy - but with no-one giving him an explanation (that as an engine driver, he's too valuable to be allowed to fight as a foot soldier). He doesn't ask why, and despite his repeatedly attempting to subvert their decision, none of the officials explain, though they have ample opportunity.

This (fairly major) quibble aside, The General is story-driven, not merely a vehicle for comedy stunts heaped on a makeshift plot. There are one or two obvious pieces of comedy (such as the soaking of everyone by the trackside water crane) but Keaton doesn't linger on these, moving swiftly along to the next part of the chase.

Whilst 'The General' is specifically the name of the locomotive that Keaton drives, it's Keaton too, as a reward for his bravery in taking on and defeating the enemy with his remarkable exploits. I have to say that I had a lump in my throat when the commanding officer sternly tells him to take off his coat, and the audience think he is about to be cashiered, only to be given an unlikely promotion. Justice is done, Keaton gets the girl and finally to kiss her properly, though not without one final bit of business that deliberately but gently undermines the emotional climax.