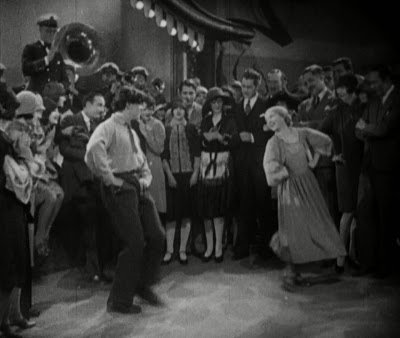 Well that was crazy fun. A simple story - a Pastoral Everyman is tempted to kill his Homely Wife, at the instigation of a City Woman, finds redemption - is very flashily told. Murnau throws all kinds of new tricks at the screen, almost inducing vertigo in this viewer. Like Metropolis, there is a declaration of moral intent in the opening intertitles. Also like Metropolis, we're treated to opening shots that celebrate the busy city and the technology that drives it, literally (trains, pistons, engines). Where director and cinematographer Fritz Lang and Karl Freund aim for expansive shots in Metropolis, their counterparts in Sunrise, Murnau and Rosher and Struss aim to cram as much into the frame as possible, such as the brief scene, framed almost as a triptych, when a boatload of summer vacationists arrive in the countryside. There are also panning shots, tracking shots, crane shots, back projections (I think - maybe front projections too) double exposures and montages. The sets and backdrops are somewhat Expressionist in style, with the distorted but plain and gloomy farmhouse interiors resembling Van Gogh's paintings of his bedroom, while the Cityscapes and interiors are brightly light and busy, with much whizzing of machines (some crude models, some full size) and bustling crowds. Perhaps the most arresting shot shows the newly reunited couple walking through astonishingly busy city traffic towards Elysian Fields. Murnau likes cars a lot. It's almost a repeat of the scene where they kiss in the middle of the road and bring the city's traffic grinding to a halt, echoing a similar shot in Der Letzte Mann.

Beyond the amazing visuals, the acting is customarily theatrical. O'Brien as The Man moves mega slowly and rubs the back of his neck to show his uneasiness when the Woman from the City whistles for him. Gaynor as The Wife just has to look at the camera and smile, or gaze sadly in long takes, her impossibly large eyes telling all. She earned the first ever Best Actress Oscar for this role.

Oh, and there is also the traditional silent era strangling, twice, though not, on this occasion, to make someone see sense. The Man is actually attempting to throttle the source of his temptations. He never lays a finger in anger on The Wife.

What I find odd about this story is that it begins as melodrama but veers to quite wildly comical (the chase of the piglet, the drunken chef, the headless statue, the Obtrusive Gentleman) and back again with the storm, the 'death', the reconciliation and the Sunrise. I'm also struck by the idea that this and Greed , another 'Greatest Film Ever' candidate, both focus on the abuse of women as central to the story. While Sunrise has a clear, strong narrative and Greed a weak one (cinematically speaking), both, along with innumerable pictures of the period, reflect an obsession with telling fables with very strong moral certainties, also based on very traditional views of men and women. (Were Sunrise to be made in the modern era, the opportunities for moral uncertainty and ambiguity would be plentiful, though this would not necessarily make it a better movie.)

Visually striking and adventurous, Sunrise is a more human and engaging tale than either Greed or Metropolis, and thoroughly deserves its place among the 1001 Movies. It also benefits from being Murnau's first American film, having lost some of the somewhat suffocating touches of German Expressionism, not least the insistence on white face makeup.

Lastly, the musical score utilises new sound technology to synchronise not just music but sound effects to the pictures. The talkies are a-coming...