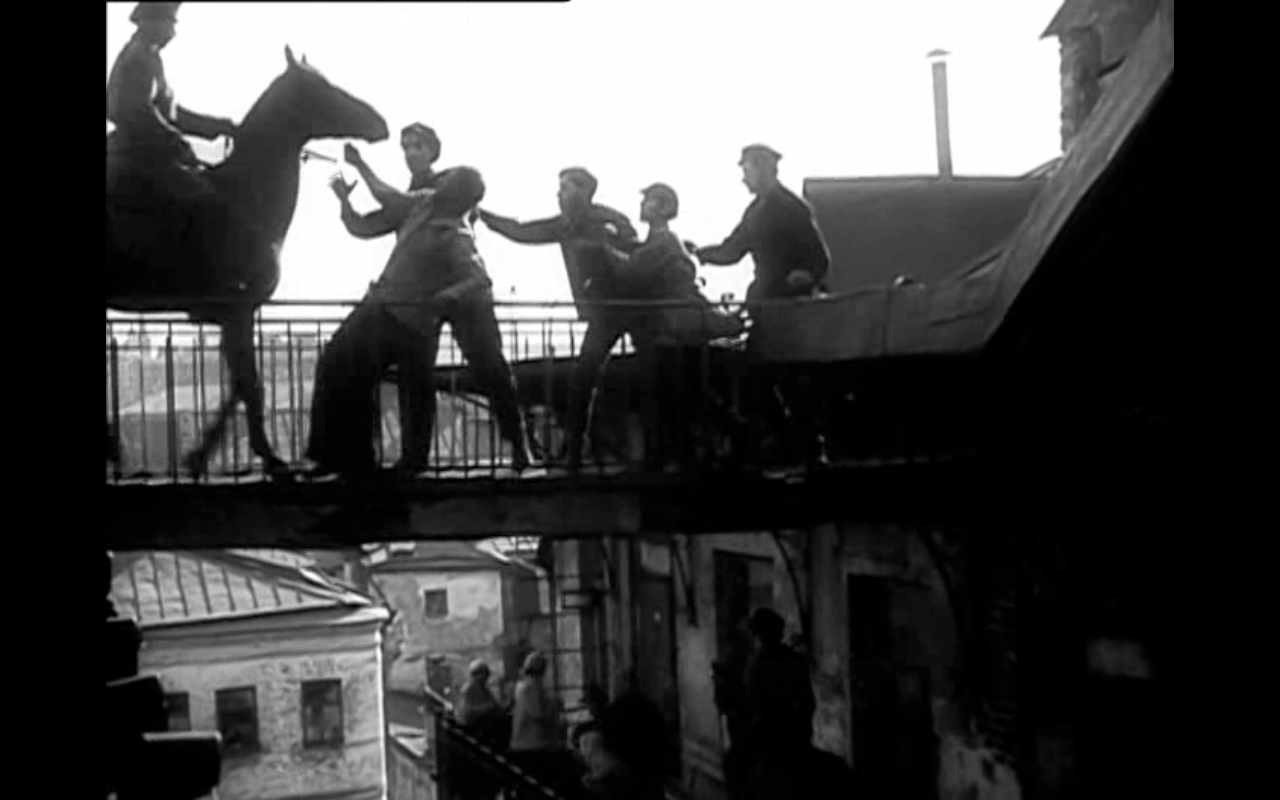 A distinctly different style from what has been seen so far in Germany and the USA. In fact, a mix of styles, as the director tries to show the strikers through a sympathetic naturalism (notably the scene where one worker relaxes with his family, bathes his daughter), contrasted with the caricatures of the factory bosses and their 'spies' among the striking workforce.

The narrative is not always coherent. This is partly because Eisenstein wants to use film for purposes other than to just tell a story. For example, the film's two-part climax begins with the breaking of the strike by the ruthless dispersal of the workers by a small company of mounted troops. The narrative - what happens and why - is less important than a succession of formal images of workers running in all directions around the factory and their homes, corralled into corners, along the landings and ''skyways' joining their apartments, while soldiers chase them down, beat them with sticks, rear up their horses over them. Some of the staging resembles more a display of acrobats leaping over gym equipment, such is the strict marshalling of the action and the camera angles, to establish this as a boiling mass of humanity (the proletariat) being hunted down by the instrument of state dictatorship. A child dropped from one of the skyways and a cut to see its fallen body is a striking image, and at the end, it seems that all strikers have been slain (arms, legs, dangling from balconies).

These are topped by the second climax, where scenes of hundreds of the working class (no longer looking like the scores of strikers) are cut down by a much larger army of infantry. This is intercut with graphic scenes of cattle at a slaughterhouse, with close-ups on a knife, a cow's slit throat gushing blood, and then a slow pan across a field strewn with bodies. (I wonder if FF Coppola was inspired by this movie when shooting Apocalypse Now?)

The final shot is of a pair of eyes, narrowing as if spying on the audience, and an intertitle appeal to us, the proletariat, to remember this carnage.

What begins as a drama, shot through with both broad and cynical comedy has turned to horror. 1001 Movies' review has more to say about Eisenstein's techniques, purpose and theory, but on a purely visual level, this is a tour de force, and worthy of inclusion in the list. You might, however, baulk at the political manipulation!