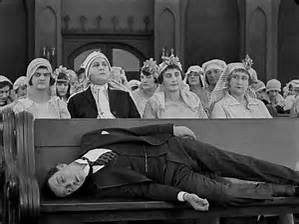 I hadn't heard of this one (with my comprehensive knowledge of the Keaton catalogue, that's surely a mistake?), but it is at least as funny as Our Hospitality and Sherlock Jr. and I'm pleased that 1001 Movies has drawn it to our attention.

Buster hopes to inherit the fortune left by an uncle, but has to marry by 7pm the same day that the lawyer notifies him of the task. His business partner advertises the fact in the local paper. Cue daft scenes of hundreds of women in wedding gowns and trains arriving at the church, then chasing Keaton down the streets, out into countryside, over hill and, most notably, down dale where hundreds of assorted rocks take over from the jilted brides.

Obviously, it's hardly a spoiler to say that all comes right in the end, but what I particularly like is the density of the gags, from the opening sequence chronicling through the seasons, his inability to declare his love to his intended, right up to the moment at the end when he is supposed to kiss the bride and everyone else gets in first.

There are one or two dodgy moments, when his search for a bride gets desperate, and he encounters a number that are plainly unsuitable, including a young girl masquerading as a grown woman, a man...and a Jew and a black woman. What would once have been straightforwardly amusing (not wildly ripsnorting) is now somewhat questionable, but I don't think this means his films should now be boycotted!