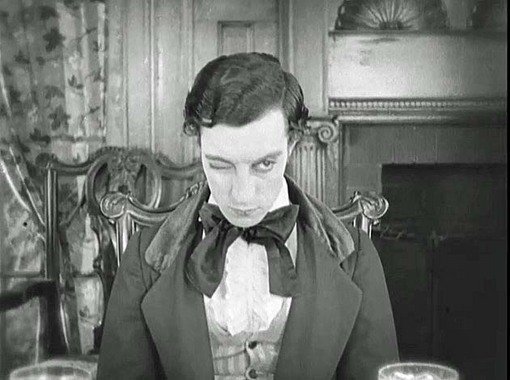 At last, a story that has a straightforward plot and story-telling (and editing) that works. Does that make it somewhat inferior or shallow in comparison with worthier films that struggle to keep a grip on the narrative? I don't think so.

The gags, the stunts, the use of lighting (such as the lightning-illuminated duel in the night-time prologue), and Buster's trademark restraint - that invariably fails to mask his inner emotions - all combine to make for a worthy entry to 1001's silent era canon.

If it has faults, I suppose the simplistic moral fable (as signified by the biblical quote on the wall of the heroine's home) seems trite, and there is the improbability that the family feud is called to a halt just because Buster's marriage to Virginia is a fait accompli. And if this is an attempt at a more 'serious' comedy, less reliant on Keystone slapstick, there are one or two formula jokes that let the tone down (such as the movable rail track when there is a donkey on the line) and perhaps the ever-present faithful dog (who runs all the way from New York to somewhere in Virginia!)

But I'm not going to carp. The train journey is a delight, with the absurd spectacle of nodding top hats, bobbing over impossibly silly terrain and comedy characters (proud driver, fussy guard, and a passer-by who throws stones at the train in order to acquire wood thrown by the driver in retaliation.) Similarly, there is the nonsense of the patriarch and his two sons trying to shoot Buster every time he leaves the house; the dinner where, while the parson says grace, the combatants on best behaviour keep one eye open to watch for the first move to draw a gun; the interlude where Buster goes fishing.

And, finally, the well-worked sequence on the top of a vertiginous cliff that leads to the climax on the river, via a last small but critical reappearance of the train is tremendous.

It doesn't carry quite the same emotional punch as Keaton is able to contrive at the end of The General, but perhaps that's why The General (to come later) is usually cited as the better movie.