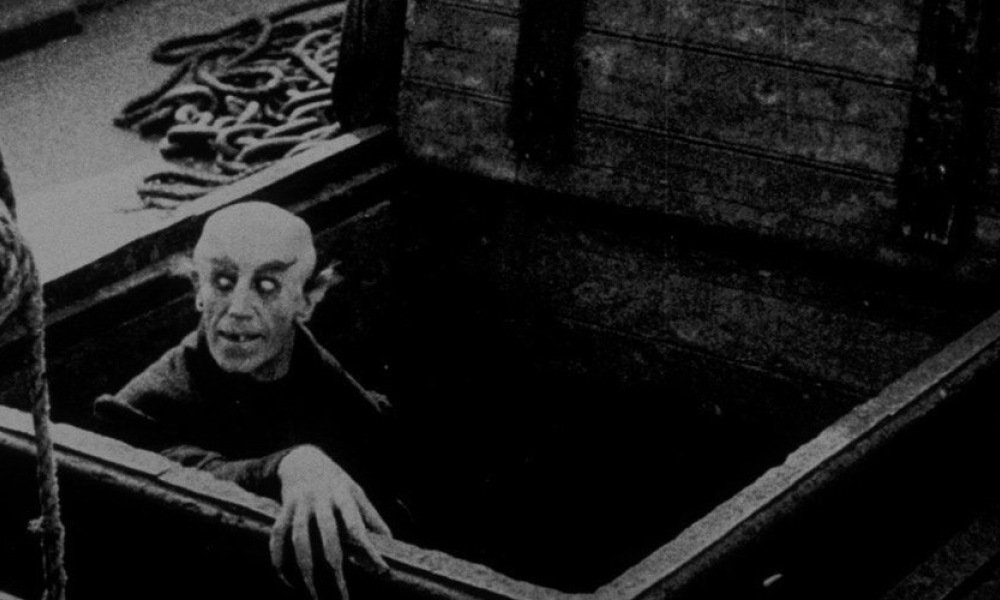 An incredibly silly story in many ways, regardless of the fact that it's based on Bram Stoker's classic 'horror', there is much to enjoy, even if the images of the evil Count have become so ubiquitous that they have lost their power to shock. The silliness arises because the plot holes gape from the start, and only get wider. (If Murnau has an excuse, it's only that this is a fantasy, and so everything can be explained by magic.)

Given that nighttime and daylight are critical to the story, Murnau struggles to establish the dividing line, which is doubtless why he wanted tinting* to help us along. Everything was shot in daylight, so when, for example, Orlok is loading his multiple coffins on his wagon, he appears to be doing it in the same sunlight that will bring about his end. He hides in the top coffin and his wagon is able to make its way, without a waggoner, to the riverside where the coffins are transferred to a raft by riverfolk who know what to do without instruction by anyone. The coffins arrive at the quayside and those that aren't turned over at inspection are loaded on to the ship, which eventually arrives, still under full sail, without anyone to steer, furl sails, lash alongside, or unload the cargo (not until after Orlok has disembarked, carrying his coffin - he's very strong is our Orlok).

The hero of the story, Hutter, is a nitwit. He fails to appreciate either his wife's fears (though she is obviously a depressive even before she falls under Orlok's spell) or the warnings of the villagers he tells of his destination. He doesn't even seem to notice that the estate agent he works for and who sends him on his mission to persuade the Count to come to Germany, is not the full shilling either. (Why does he knot sheets together to escape from his room in the castle? We can all see there are no locks on the door of his room!)

Having said all that, there are some creepy scenes, though it's no longer a terror, and certainly, I wouldn't want to meet the Count on a dark night. It retains its interest mostly for being old and a curio. Perhaps audiences at the time did find it scary. The 1931 Dracula is more sophisticated in its narrative and editing, and Renfield is better than Knock, but Max Schreck scores over Lugosi. I wonder if I should watch the Herzog remake? Oh, I just checked: it's on the list. All in good time though. I've got at least 500 films to watch before I get to 1979!

*Although I found this easily enough on Youtube, it was difficult to discern which one of several versions available including from reputable purveyors of Blu-Ray and DVD editions I should watch. I settled on one that claimed to have a recreation of the original score - in the style of standard classical music - by Hans Erdmann, and tints for some of the scenes. The intertitles were in English (as opposed to German with English subtitles which is on one of the two generally recommended Blu-Ray transfers).