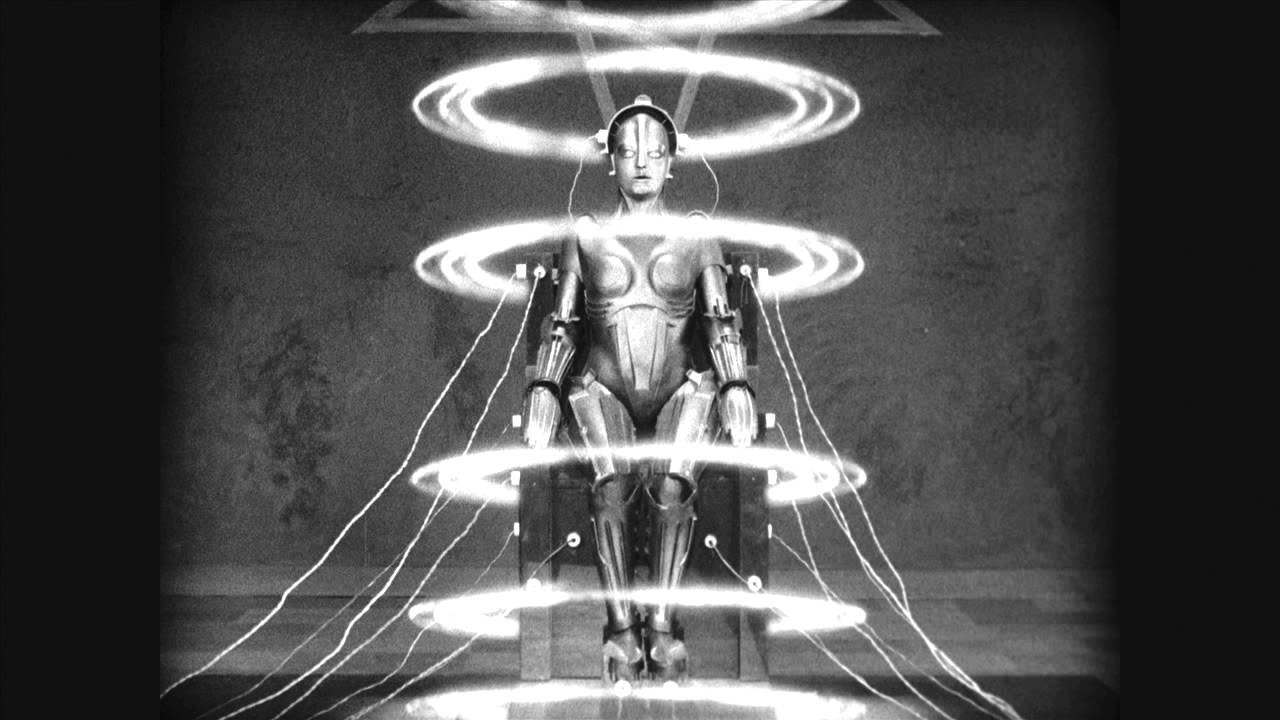 I'm in the middle of comparing the alleged 'restored' version, with the Giorgio Moroder version, with the 16 fps version. Whichever you choose, you get more German expressionism, theatrical overacting (though slightly diminished in the 16fps version), white faces, flat cardboard scenery...but some memorable images, the first pan shot that I've noted, and a crude dolly zoom...doubtless there's a more technical term.

The transformation scene in which the Mad Scientist combines his beautiful Man Machine with Maria is excellent.

If you pick the Moroder version, you'll be disappointed if you're expecting continuous banging disco tunes.

So, having now completed the whole thing, I'm underwhelmed. I first watched this sometime in the 70s I think, and I remember enjoying it. This time, I enjoyed the same things - the robot, the effects, the first 20 minutes of dystopia, perhaps when the statues of the Seven Deadly Sins came to life. But the story got sillier (I'm in good company: HG Wells said the same thing) and less appealing, and this was yet another film where the director feels compelled to show off how he can control a crowd (and I haven't even got to The Crowd yet!). Workers rushed everywhere (except when they stomped sullenly at the beginning to show how dehumanised they were) danced in a ring, clambered over machinery, chased Good Maria and then Bad Maria; swarms of children got very wet and implored Good Maria and Naive Freder with many outstretched arms ("Hilfe! Hilfe!"). Funnily enough, they didn't crowd round their children at any point. It was much more important to lynch Maria for telling them to break the Machines than it was to rescue their own Kinder from inundation.

Then we got the Hunchback of Notre Dame moment as the Mad Scientist ran up the roof of the cathedral with Good Maria, wrestled with Freder and fell to his death, which he richly deserved for creating Bad Maria in the first place, although the head honcho, Joh (how do you say that?) survived and got to shake hands with Grot, the foreman of the workers right at the end so It All Ended Happily Ever After.

If it wasn't for the visual highspots, and the rhythm of the editing in climactic moments (almost literally in the 'Babylon sequence), there would have been nothing worth seeing at all, never mind before I die.

Still, I'd rather watch this than a dystopian story about an amoral dentist who gets to die in a desert.