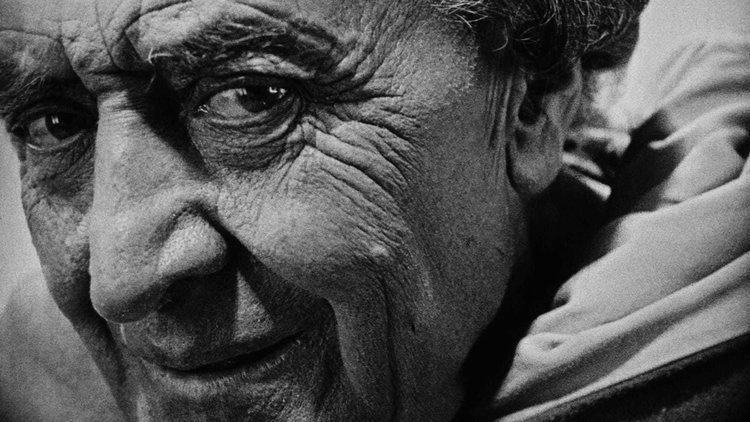 If you get to see one of the longer revisions of this film (I saw a French version running at about 110 minutes, with no music) you may eventually tire of the extraordinary performance by Falconetti which focuses in almost perpetual close-up on her stunted emotional journey from fearful prisoner to fearful martyr via Jesus-like sainthood. I was reminded of Jane Fonda's tears and snot in Klute, though Joan forgoes the latter  fluid.

Director Dreyer's expensive set is one giant whited sepulchre, filled with robed, gowned and helmeted priests, lawyers and soldiers filmed mostly in plain close-up, though with some striking tracking shots and dutch angles - often combined. The plot is blatantly plagiarised from The Bible (the book, not the movie) as Joan's trial includes some of the same smart answers to her interrogators and the same mocking by soldiers of the fake king with a fake crown.

Were this to be made today, cynics would complain that it was self-consciously filmed (and acted) Oscar bait, but no foreign language films from 1927-8 were honoured at the first-ever ceremony in 1929. Its stylised acting and cinematography are not to everyone's taste, and it flopped with home audiences in France. Yet it regularly appears in 'Best Ever' lists. Its treatment of Joan's trial and execution are hypnotic and unsparing. Though torture is only implied (except when a soldier twists her arm and fingers to remove a ring) we glimpse her burning corpse on the byre in final battle scenes that may have inspired Tarkovsky 60 years later, as the English invaders suppress protests by the French natives.

A great film performance? Certainly, and this, only her second feature was also her last. As for the film overall, it's pretty compelling, but the version I saw contained some narrative curiosities (characters trooping out of one room only to all assemble in another, without any apparent reason), and odd framing (characters partly out of shot. Whilst this may have been due to the limitations of the material available for restoration, it interrupted the flow. I felt that, not unlike Greed, this movie's reputation partly exists on a version of the film that many people haven't actually seen.

Oh, and whilst my French is reasonable, I couldn't find one with English subtitles, but my Portuguese is coming along nicely!