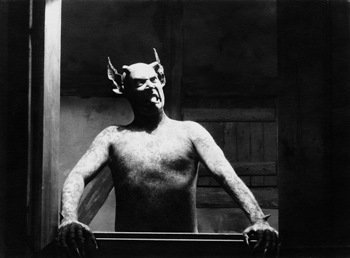 The 1001 Movies list is set out in chronological order, starting from 1902 (that's seven years after the first public screenings of movies, by the Lumière Brothers: odd that nothing by them or Edison was regarded as sufficiently significant to merit inclusion). I chose to start not at the first in the list (which I had already seen many years ago) but with this Denmark/Sweden film about witchcraft, number 16 in the list.

It's a curious mix of semi-documentary and dramatic reconstruction, with some fascinating images and, inevitably, given our more experienced movie expectations, some unintentional comedy. The demon Pazuzu puts in an early appearance as an extra - well, a passing picture in a book in the dull opening with intertitles introducing the subject. (He was later to reappear 50 years later in The Exorcist as the demon possessing Regan). In a sequence reconstructing a witches 'Sabbat', the demons stick their tongues out - a clear sign that they are in thrall to Satan - and perform giddy dances. There are some creepy trick effects - as when witches fly at speed over the rooftops - tasteful nudity as women are presented to the devil for his pleasure, and riotous nuns possessed (by the spirit of Monty Python, apparently).

The movie closes with a moral point about how our treatment of the poor and the elderly in medieval times may have been barbaric, especially for the solitary crone accused of witchcraft, but we're still superstitious now, and our modern treatment of the sick and elderly may not be brutal, but not much more caring.

I watched this on Youtube and discovered the challenge of trying to track down a complete version, one with music that was intended to accompany one of the official releases. I failed, but the soundtrack on the version I saw did add to the atmosphere.

I can't say I was gripped - nor (and I'll try and remember to make this joke only once) did I feel that I couldn't go to my grave without having seen it.

Though, come to think of it, it might have provided some insights into what may lay ahead if I end up Down There!