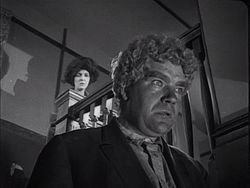 Yet another film with a tortuous road to the screen. It leaves me asking, "Can a film so hacked about constitute a 'great', when it was never available to the general public in its 'great' form?"

I'd say, when it's finished and released by the owner (usually the studio) and on general (usually meaning worldwide) release. Much as I like the notion of the 'Director's Cut' (I've got a few of those on DVD/BluRay) they often seem to me to be vanity projects rather than honest attempts to produce a more perfect version. After all, the studios and financial backers who fund the making of a film are entitled to set limits on what producers and directors can actually make.

In the case of Greed, rumours that von Stroheim shot 100+ reels for this move may be wild and unsubstantiated exaggerations, but if MGM don't like the original 42 reel version (8-9 hours, depending on projection speed) as a commercial product, they have a point. Nevertheless, many famous directors since have queued up to declare Greed as "(one of) the greatest movie(s) of all time", and critics have spotted influences in Visconti, Welles, Kurosawa, Huston...

So which version did they see? The 110 minute run on release in 1924? Is that the one I should be watching so that I can understand their perspective? Wikipedia seems somewhat confused, listing the film as 140 minutes long, though saying that it was cut down for first release to 10 reels - that's 110 mins.

In the meantime, watching what is readily available, and seeing through my research where the plot will go, I suspect that I'll not be persevering. It's a film about a dentist who takes advantage of an anaesthetised patient, then marries her, falls out with his best friend (a rival for her love), murders his wife, heads out west and ends stranded in the desert, handcuffed to the best friend who had come after him for money and revenge. Surely this is melodrama with sorrow piled on thick. Or even a comedy: a nine hour epic about a dentist?

It's not a comedy (though there are comedy moments, such as the wife's immigrant family). If this merits inclusion among the 1001, it's on account of the myth of the unseen 9 hour version, where Stroheim reportedly spun an elaborate tapestry of characters and their moral intertwinings ("All human life is here!") I viewed some of a 4 hour reconstruction (actual footage intercut with stills from the rejected scenes) accompanied by the music of Jonny Greenwood (I can't find out if this is an authorised version). It's a thoroughly depressing experience (and I'm a fan of Greenwood's work). Come to think of it, watch There Will Be Blood, with which Greed has much in common, not least Greenwood's scoring and an exploration of the miserable side of humanity. At least Daniel Day Lewis isn't sporting a Harpo wig.