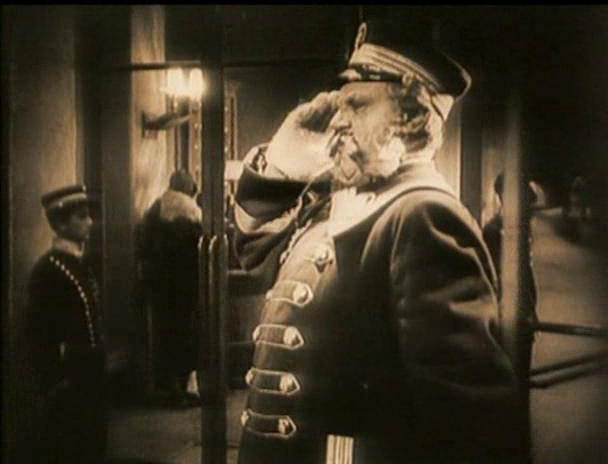 This is a slight story whose main purpose seems to have been a vehicle for cinematic invention; specifically, can a story be told coherently without any intertitles, through visuals only?

The answer is "Certainly!" Not only that, but the story can be told engagingly, and, assuming the careful attention of the viewer, with a style that raises the narrative above a mere tale.

I watched this several months ago, before embarking on writing the blog, so had to watch it again to refresh my memory. I had decided that it was an over-acted melodrama, merely an opportunity for the star, Emil Jannings, to wring every ounce of pathos that he could from such an oddly unpromising role.

Now, I have warmed to it. This is partly because turning down the music enabled me to make my own mind up about the intentions of the director, and partly because having researched the story of its making better enabled me to realise what I was seeing. We are now so used to fluidity of camera work and editing that we take for granted when we track alongside a character, or assume his viewpoint and sway with him when he is drunk. Yet little of this fluidity had yet made it to the silent screen. Cameras were still, fixed, only rendered mobile by putting them on trucks for the few grand shots seen in action epics such as Orphans of the Storm. The idea that you could tilt, turn, track, pan, zoom even a fixed camera was (as far as I have been able to determine) yet to become fully realised.

Now, for Der Letzte Mann, the camera was at last 'unchained', and the viewer is treated to what were, for the time, some novelty shots that were to become standard fare as the technology (and cinematic vision of the writers and directors) developed. More than novelty, however, the sets, lighting and shot choices bring something else to this film: a desire to explore how movement and light, the two elements at the core of motion pictures, can be manipulated to illuminate something beyond the mere mechanics of the plot.

Although Jannings' doorman dominates, Murnau (director) and Freund (cinematographer) are just as interested in the other hotel workers, the hotel guests, and more particularly, the people living in the doorman's neighbourhood. Their busy, if humdrum lives are beautifully exposed through watching them beat carpets (so many carpets to be beaten!) and hang bedding to air over balconies and out of windows. The sets are constructed so we see this happening on different levels and different angles, and more than once. In one transition, we see lights going out across the apartment blocks at night, contrasted with the myriad lights of the city centre, still busy with the rich enjoying eating, drinking and rushing about in grand cars.

Furthermore, we see much of the action from the wrong side of a window, or windowed door. Silhouettes are seen raising glasses at a wedding party; the doorman is seen struggling to get his glasses out of his back pocket through the transparent doors to the manager's office. Later, he is seen descending a darkened staircase to the washroom to which he has been assigned.

In fact, light and reflections are everywhere: in washroom mirrors, in rich men's shoes, off champagne bottles and spectacles, and, notably, off the torrential rain that drenches and exhausts the doorman. And it's the blurring and distortion of light that gives us the subjective view of the drunken doorman and his dream of wielding a massive piece of luggage like a superhero, confounding his advancing years and his critics.

Much has been written about the signficance of 'uniform' in Germany, and certainly the doorman's grand overcoat and cap play an important role in the story. When he is unceremoniously disrobed, and later, when his family and neighbours discover he has lost his position, we feel some sympathy for him. Yet there is so much else going on in the film - not least a strong streak of comedy - that I found it difficult to take it at face value. This was not a pathetic story, but a sharp tale about how image and appearances are intimately connected with self-worth. We even see one of the junior bell-hops glance in a mirror to adjust his hair as he rushes to his duties. The nightwatchman is acutely conscious of the inadequacy of his attire when he arrives for the feast at the end of the film. In fact, almost every character, major and minor, not just those who come to the washroom, exhibits a concern about their appearance and, consequently, their reputation.

This does not require either dialogue or intertitles, and this compels the team that created this film to find inventive ways to present the narrative. One of my favourite shots, however, is one requiring the careful choreographing of motor vehicles, pedestrians, and the key actor (the doorman's wife) who is seen coming, in a hurry, through a maze of traffic towards a camera tilting downwards to track her movement across the street. It is this kind of subtle dynamism that is a commonplace today, but was the kind of novelty that merits this films' inclusion in the list of 1001.