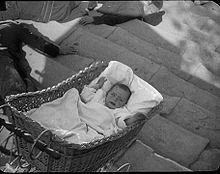 As an exercise in taking an historical event (the mutiny of the crew of the ship and the suppression of a revolutionary demonstration in Odessa) and turning it into a cinematic myth, this film is probably unrivalled. It's head and shoulders above all the movies I've so far reviewed in its use of framing, actors-as-images, montage and editing. It unquestionably belongs among the 1000.

Frankly, of the silent era films I have watched to date, this was the most compelling. Eisenstein's art is mesmerising. Whilst other directors are beginning to make the camera much more mobile, he overcomes the drawbacks of the fixed camera by ensuring that almost every frame contains the movement of actors, light, waves, flags, guns, pistons...and, of course, the infamous baby carriage. Whilst the sequence on the Odessa steps is singled out for celebration and study, the whole film is one long exercise in the rhythm of motion and light, and it's necessary to find the right version to get the right soundtrack to accompany all that dizzying motion. There are many, and I've not sampled them all, but of those that I did, neither the Pet Shop Boys, nor the Shostakvich mix-tape suited.  The one I ended up watching in its entirety, and the most appropriately relentless (distractingly so in the final climax) was described in Wikipedia thus:

For the 2005 restoration of the film, under the direction of Enno Patalas in collaboration with Anna Bohn, released on DVD and Blu-ray, the Deutsche Kinemathek - Museum fur Film und Fernsehen, commissioned a re-recording of the original Edmund Meisel score, performed by the Babelsberg Orchestra, conducted by Helmut Imig.

And read here for some insights into the relationship between the composer and director, where it is clear that what Eisenstein wanted was 'rhythm, rhythm, rhythm'.

Does it matter that the massacre on the steps never took place? Or that the mutiny was a failure? The film represents a truth about the history of the revolutions of 1905 and later 1917 and a truth that the propaganda of which Potemkin is a prime example should be studied to be understood, especially that the action is subservient to the message, most notably in the final scene. There is something hugely ironic in the making of a film whose action climax is that...nothing happens. Potemkin, racing towards the battleships that were sent to end her mutiny, readies to fire. This sequence is excruciatingly long, but tense nevertheless, so when there is no firing, and only smiling sailors and cheers of "Brothers!" as battle is averted, only those seeking ideological victory would have been satisfied. If this were Hollywood, truth would also have been sacrificed by the creation of an action-packed incident!

Some things to note:

As in Stachka (Strike!) Eisentstein's actors are used more like gymnasts or wrestlers, in their energy and physicality; or like mannequins to be twisted and shaped to fit the frame. In one shot, the actor seems to be deliberately adjusting his pose as he hadn't quite hit his 'mark'. Characterisation is non-existent, except to the extent that the 'bad' officers do some villainous moustache-twirling, literally. There are neither the crude caricatures seen in Stachka, nor any attempt to develop any individuals as rounded characters, not even those who are of historical significance (such as the leader of the rebels, Vakulinchuk).

There are many shots of columns and queues of sailors criss-crossing the ship on different decks. Whilst this is visually for the purpose of creating perpetual movement, I take it as representing the idea of a people on the move, the proletariat mobilised as one, but also representing the conflict sparked by the injustices of life in the Tsar's Russia and the conflict to come. This is echoed in the montage of the statues of lions, appearing to rise in indignation and anger at the bloodshed.

The one place where the camera actually seems to be on the move is during the Odessa steps sequence, as it tracks down alongside the baby carriage. Whilst this is not the first tracking shot in cinema history, it neverthless makes a significant contribution to the momentum of the whole episode. Curiously, Eisenstein does not seem to be interested in the experimentation seen in the work of the German directors and cameramen, despite the possibilities that greater freedom would have given him. No turns, zooms, swivels, pans for the great Sergei. Imagine a dolly-zoom as the mother sees her child stricken under the soldiers' boots!

Or if only he'd been able to pan, he could have made us all feel as sick as Wes Anderson does in The Grand Budapest Hotel.

Perhaps not. Less is, in this case, more.