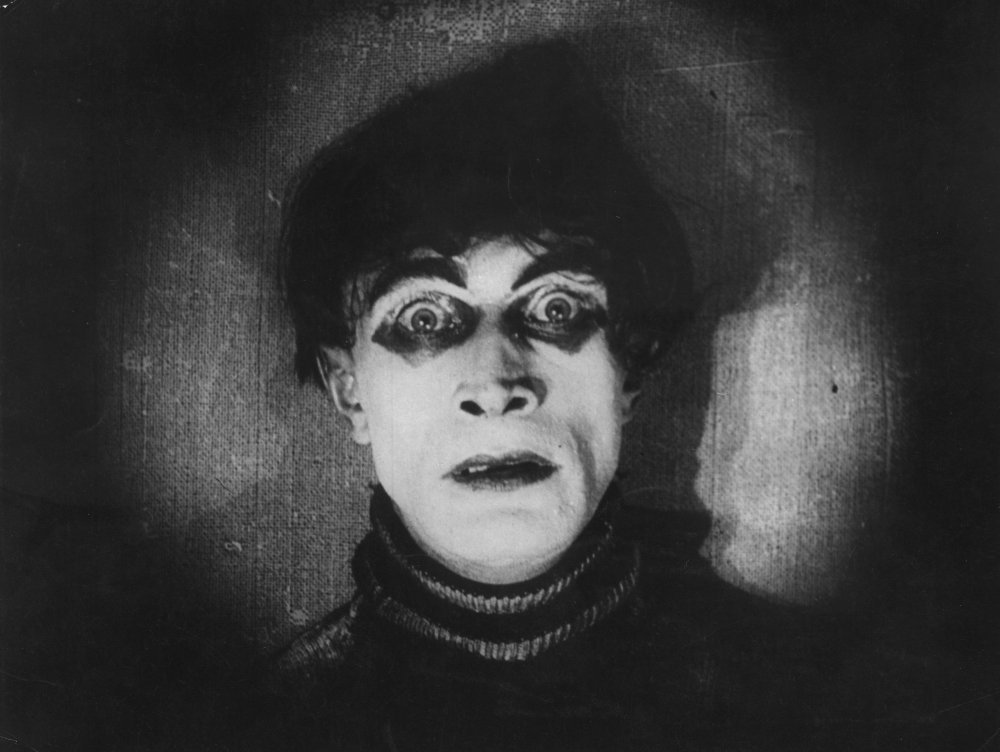 In common with a number of early movies, the story is presented as if a theatrical play, divided into acts and scenes, and with flat, yet strikingly designed sets. The acting is as stylised as the makeup on the face of Cesare, the "somnambulist" brought to a small German town's fair by Dr Caligari. When murders occur, suspicion falls on the showman and his human exhibit, who has been asleep since his birth 23 years ago, but who can be woken to answer, like an oracle, any question asked of him. Two men, Francis and Alan, rivals for the hand of Jane (who they fall in love with at first sight) are at the fair. Alan, who asks how long he will live, is told he will die before dawn. He becomes a murder victim. It is Francis who has to hunt for the killer.

The story unfolds at quite a stately pace, but unlike some movies before, and yet to come, there is precious little waste or confusion. There is an inevitable logic as we move from one scene to the next (though we must bear in mind that as this is a 'horror fantasy' there are considerable story improbabilities). The only complexity in plotting arises out of the revelation that Francis, who we see in a prologue begin to recount the whole tragic tale to a doctor, is revealed to be an inmate of the mental asylum whose director is Caligari. The only ambiguity is that there is no confirmation that it is Francis who has killed his love rival.

There is little technically showy in the camerawork, still mostly fixed and immobile, though there is one shot resembling a pan, as we watch a row of actors all reading the diary of Caligari. There is much use of the iris shot to open and close scenes (a trick that proves tiresome in some movies with a string of short scenes, though not so here) and to draw attention to points of interest. Perhaps this is most significant at the end, where a close up of the director teases us into speculating that our insane hero is about to suffer the same treatment as Cesare suffered at the hands of Caligari - to be turned into a somnambulist.

Taken at face value, this is nothing more than a gothic tale with all the features later to become the staples of the Universal (and Hammer) horror cycles. There is a doomed 'monster', a mad scientist, a femme fatale, the incompetent town officials and a cast of villagers. But this was the first of its kind.

It is also possible to interpret the story as an allegory for the state of Germany at the time: Caligari wants to know if a human can be put to sleep and made to carry out acts that would be considered unconscionable when awake. Could this be what the German state did to its people in order that they would commit to waging the Great War? It's possible, but it is not the moral that make this film worth watching, but the remarkable set design, make-up and costumes.